After writing two posts about my primary school days, I'm impatient to move onto my secondary school experiences. Reminiscing is quite addictive.

I was rather critical, in my previous post, of the teacher who sent me home in my socks. Aside from him, however, I have nothing to complain about in any of my primary school teachers, as little as I liked school.

Some poems from my 2005 folder, which I haven't blogged before. (If you think these are bad, you should see the ones I haven't put up.)

Yes, I was pretty down in 2005. My life was not going anywhere and I had no spiritual faith to buoy me up. I felt that history and culture was stagnating, as the second poem expresses, and that all we had to look forward to was more of the same, forever. I was also reading a lot of Philip Larkin, which I think is pretty evident.

They call it the rush-hour, the time when nothing moves.
He tries out a brand-new curse as the traffic creeps
Down roads that knew long ago the beat of hooves.
In the city of fevered dreams that never sleeps
Life strains to look like the world on magazine shelves
And only the bed-sit crowd clock out at five
While the men in the crumpled shirts convince themselves
That the heart that beats the most is the most alive.
Right now, out there, someone is walking a road
That goes from nowhere to nowhere. To exchange
Just isn't on. You don't take off this load
Till the doctor and undertaker come in range
And you've coughed up every curse the world is owed.
What made him think despair was something strange?
Apathy
Now all the seas of the world are at low tide
And all the various forms of the verb "to be"
Seem unpronounceable. The dawn is old.
Strange to think anyone ever laughed or cried
Or started a war. To live is just to see
A roll of plain beige wallpaper unrolled.
What hasn't been said by now? What hasn't been tried?
How keen they were this time last century!
But the fire is gone by now and the room is cold.
Unhappy Birthdays
We learn to hesitate at twenty-two--
To wonder what most people would call young.
You look down more in climbing, rung by rung--
So much clear air between you and the ground.
But most people are further up than you--
The small hand moves. You just make out the sound.
Before too long it echoes in your years--
Now a statistic is a cause for shame.
Changing, and trying hard to stay the same--
They're both ridiculous. What have you got?
Ken's a professor and Yvonne's engaged.
You scan your mirror face, and wonder what
Most people would consider middle-aged.
What do you fear more-- death or twenty years?
On an Old Man Who Didn't
When you begin to reminisce
About the good old days
I squirm at your invented bliss
And advertiser's praise.
But still I listen just to please
And why should I condemn?
I know the doors, I have the keys,
But I will not open them.
I will not turn the lock to show
Your treasury's a hoax--
Extinguishing your eye's soft glow
With cruelly called-for jokes.
But finger with fake ecstasies
The glass you call a gem.
I know the doors, I have the keys,
But I will not open them.
Cookery p.138
These pictures of food eaten long ago--
Voluptuous as models, framed like art.
The light makes tender love to a jam tart.
Pasta and sauce embrace in a tableau.
As elegant as if we did not know
The whole unpleasant, mean, digestive part.
Here is our contradiction rendered pat--
The brute and beauty, moulded into one.
Mere fodder, something made worth looking at--
Our spirit lavished on a hot cross bun.
A healthy beast would bolt it and be done;
Having a soul is not to stop at that.
The Curtains
He thought, when he was just a boy,
And mother drew the curtains closed
(Hiding the darkness from his eye)
It slew the ghosts that he'd supposed.
His mother knew the secret way
To shrink the world into a room.
When evening tea could keep at bay
The shadows in the growing gloom.
The magic didn't pass to him.
He draws the curtains, but outside
The world remains, grows cold and dim,
And would not notice if he died.
The Baptists
The nameless baby sleeps, and does not hear
The women practice different syllables.
Somebody snorts on hearing "Guinevere",
But deep inside, each woman of them thrills
At visions of those unspent years unfolding:
A ghost parade of faces, school-yards, rites.
She sleeps, oblivious to their delights
The future like a secret she is holding.
Janet and Miriam, Rachel and Louise;
They haggle on a sound that will mean her.
A name that will outlive their fantasies
And one day, many years from now, will stir
Devotion or antipathy or pride
Or all of them at once, in other hearts.
The baptists sigh, and know, for all their arts
Another world will own what they decide.
The Unstopped Watch
I was cleaning out old boxes when I found it;
A long discarded watch that hadn't stopped,
Right to the very minute. Quite astounded
(Though God knows why), I thought of old men dropped
In lonely nursing homes, sadly repeating
The stories that had meant something before
Or mental cases, something monstrous eating
Their minds, behind a monstrously shut door.
Monstrous, somehow, those hands should go on beating
In this small world where time would move no more.
Posted by Maolsheachlann at 2:29 AM 4 comments:

Well, it's one of my blog traditions to mark neglected traditions like Guy Fawkes Day, so here goes.

As you know, Guy Fawkes was a (Catholic) conspirator who tried to blow up the British parliament in 1605.

For many years the foiling of the plot was commemorated in Britain. Wikipedia says it was "the predominant English state commemoration" in the early 1620s. But even when I was a kid, I remember the English comics used to print Guy Fawkes masks which you were supposed to cut out and attach to a cardboard base.

Now, of course, although commemoration of the day (or even the night) seems to have almost disappeared, Guy Fawkes is an icon of the radical left, a fact which occasioned this rather funny meme: 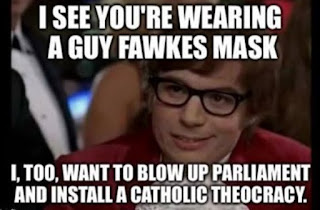 Looking for "Guy Fawkes" poems, I came across this piece of folk doggerel which is not exactly polished, but rather charming:

Guy Fawkes, Guy Fawkes,
'Twas his intent.
To blow up the King and the Parliament.
Three score barrels of powder below.
Poor old England to overthrow.
By God's providence he was catch'd,
With a dark lantern and burning match

A penny loaf to feed ol'Pope,
A farthing cheese to choke him.
A pint of beer to rinse it down,
A faggot of sticks to burn him.
Burn him in a tub of tar,'
Burn him like a blazing star.
Burn his body from his head,
Then we'll say: ol'Pope is dead.

Posted by Maolsheachlann at 2:08 AM 2 comments: