The Book of Faces

Life has been quite hectic recently. I turned forty-five on Saturday. It feels strange. I don't feel any older than twenty-five.

Although I haven't had time to blog, I'm always posting on Facebook. I generally post on Facebook several times a day. It's just so user-friendly. My mind jumps all over the place all the time, I have a lot of thoughts, and it only takes a few minutes to tap out a Facebook post.

Here are some of my recent ones. They may be of interest. At least they'll keep the blog ticking over.
* * * *

The world is changing so quickly that I have a strange sensation of perpetually living in the past. The technology we are using today will be vintage almost instantly. This consideration makes me cherish it rather than resent it. The same applies to social forms and institutions. I already think of libraries full of books, for instance, as survivals on the verge of extinction. Or the phrase "ladies and gentlemen". Or a hundred other things.

* * * *
I've resolved to "follow" all my Facebook friends. I'm intrigued by the people who write post after post full of rock-solid polemical certainty. How can anyone be so sure about everything? And so sure other people are just plain wrong?

I mean, I'm plenty opinionated, but the things I feel sure about seem like a small island of light in an ocean of darkness. I'm not even sure I'd like to live under floodlights that illuminate as far as I can see in every decoration. Through a glass darkly seem more appropriate for the human condition.

The new British Prime Minister represents Richmond in North Yorkshire. It's one of the few places in the world I've been. The second place outside of Ireland that I went to, after London.

I was watching History of Britain by Simon Schama and admiring all the hilly country he showed in it. I had a hunger to go to some hilly part of England, went to my map, and picked a town in a hilly place. It was Richmond. It took two trains and a bus to get there.

It was picturesque but not much to do there. I spent most nights sitting in an almost-empty hotel lounge looking out at an almost-empty town square, drinking brandy and Cokes and reading DH Lawrence. I was increasingly in revolt against modern life and Lawrence appealed to me for that reason. I was reading his Apocalypse, the last book he wrote, a commentary on the book of the Bible. It contributed to my growing sense that all roads lead to Christ, though I wasn't there yet. I still remember the barman giving me a free brandy and Coke one of the nights.

Wikipedia tells me that "Richmond in Yorkshire was the origin of the place name Richmond. It is the most duplicated UK place name, with 56 occurrences worldwide." I was destined to spend a lot of time in one of them.

The famously complacent, triumphalist, bad old Catholic Ireland (below). From what I've seen of old magazines and other publications, this sort of self-questioning was the norm rather than the exception. 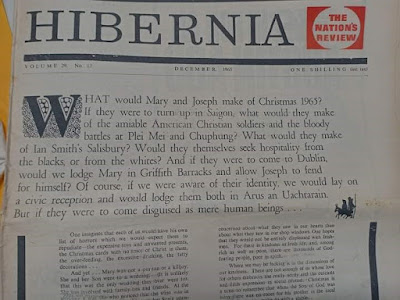 I see a lot of memes like this (below). I find myself wondering who exactly is being "gotcha'd" by this? I have never met a single person who put themselves on Team Emotion over Team Facts. Progressives certainly don't. They think conservatives are anti-science and anti-truth, just as conservatives think liberals are the same.

So if your response is: "Well, liberals think men can be women just because of how they'll FEEL", I can produce you thousands of liberals who think that conservatives are heartlessly ignoring scientific evidence that transexuals need to be treated as the opposite sex because, well, depression, suicide, supposed hate crimes....I don't believe any of this stuff, but the point is that both sides are appealing to facts or supposed facts. The PRINCIPLE is not in dispute. 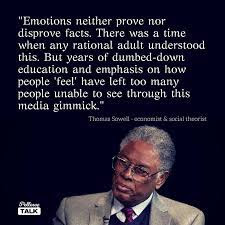 * * * *
My aunt, who was a farmer's wife, had a picture of the cows coming home (literally) in her parlour. It was quite a broad landscape with the cattle as relatively small figures in it, very rugged terrain. And once, when I was lodging in a house in Stillorgan, there was a picture halfway up the stairs showing geese or ducks or something flying over marshy land.

I often think of those pictures and feel a sense of calm and tranquility, even all these years after they left my life.

Noel Coward famously said: "Extraordinary how potent cheap music is." Ditto cheap art. These were both the kind of paintings you might buy in a charity shop or sale of work or some such place.

* * * *
Reading the Letter to the Corinthians and indeed all the epistles always gives me a strange feeling. They have a unique aura of naivety combined with authority. They seem ancient in a way that can't be measured in centuries, primordial. I always feel I am looking at the undergirding of our whole culture and civilisation.
Posted by Maolsheachlann at 3:47 AM 2 comments:

My Carmilla article in Ireland's Own

I was delighted that my article on Joseph Sheridan Le Fanu's Carmilla was chosen to be featured on the cover of the Ireland's Own Halloween Special. Beautiful painting illustrating it by Steven Brown.

You can read the opening of the article on the Ireland's Own website here, but if you want to read more you'll have to subscribe!

(Despite the typo on the web version of the article, I am no relation to Le Fanu!)

The issue also contains my profile of Fr. John O'Connor, the Irish priest who received G.K. Chesterton into the Catholic Church, and who also provided the inspiration for his Father Brown character. Posted by Maolsheachlann at 3:30 AM No comments:

"Dear blog reader, how did you like my latest posts?"

"Too vague? Too eccentric? Too dreamy?"

"Should I do more book reviews?"

"I must repeat I have no comment at this time."

"I'm very sorry. I have absolutely no comment at this time."

"But it's so discouraging. It's like talking into the void."

"First world problems, I get it. But it would be nice to know somebody was out there."

"But Edward Feser gets DOZENS of comments. Why does he get dozens of comments?"

"Because he's a Thomistic scholar who makes actual arguments. There's something to get hold of. What am I supposed to say when write long rhapsodies about snowglobes and the wonders of everyday life? Half the time I don't know what you're talking about, and I suspect you don't either."

"I see your point. But you see, I'm trying to steer clear of controversy. Controversy is so easy. All I'd have to do is bash the Pope, or bash the people bashing the Pope--"

"Ah, so I get it. You want to avoid anything resembling clickbait or pandering, but then you complain that you don't get feedback. See the contradiction?"

Posted by Maolsheachlann at 1:19 AM 6 comments:

Moses and His Arms

It's of special interest to me because I've just been reading the Book of Exodus. (I'm trying to spend much more time reading the Bible.) The passage where Moses has his arms held up, as the Israelites fight the Amalekites, seems slightly weird and inexplicable. Bishop Barron's exegesis is fascinating, and reaffirms to me the depths of Scripture.

Posted by Maolsheachlann at 5:24 AM No comments:

I had heard many say that they wanted to worship God in their own way and did not need a Church in which to praise Him, nor a body of people with whom to associate themselves. But I did not agree to this. My very experience as a radical, my whole make-up, led me to want to associate myself with others, with the masses, in loving and praising God. Without even looking into the claims of the Catholic Church, I was willing to admit that for me she was the one true Church. She had come down through the centuries since the time of Peter, and far from being dead, she claimed and held the allegiance of the masses of people in all the cities where I had lived. What if they were compelled to come in by the law of the Church, which said they were guilty of mortal sin if they did not go to Mass every Sunday? They obeyed that law. They were given a chance to show their preference. They accepted the Church.

Dorothy Day, The Long Loneliness.
Posted by Maolsheachlann at 5:22 AM No comments: