Thoughts on the Feast-Day of the Conversion of St. Paul

Today is the Feast Day of the Conversion of St. Paul. I've just been to lunch-time Mass in UCD. The priest, in his homily, said that God could make the most extraordinary changes in our life. He said that God didn't cancel St. Paul's previous personality, simply took his previously existing gifts and put them to His service.

Since I've started writing this blog post, I've realized that I actually wrote it already, two years ago. At least, I wrote a blog post on the same feast where I said much of what I intended to say here. So I'm just going to paste that in. 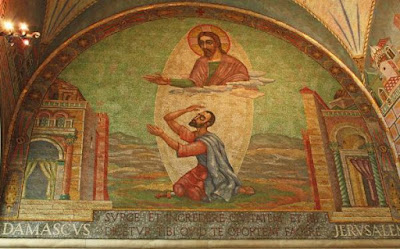 The only thing I really had to add is that I realize Groundhog Day, my favourite film of all time, is also the story of a conversion, albeit not a conversion to Christianity. (I've been writing an article about it, so it's been on my mind.)

Here's what I said this time three years ago:

As I've mentioned before, "the road to Damascus" is one of my favourite phrases in the whole world. It's up there with "softly falling snow", "the cold light of day", "down Memory Lane", and other phrases in which I can lose myself.

I'm also very interested in conversion. Some years ago an editor from a publishing house contacted me, suggesting we work on a book proposal for his editorial board. He was particularly taken with this post, on my idea of a man, and suggested fleshing it out to book length.

I didn't like that idea. In my work in a university library, I've recently found myself handling a lot of books about masculinity, and (even worse) "masculinities". They're the new thing, and they make me cringe a little. (The men's conference I posted about recently was my little joke. I think I underplayed the joke as everybody seems to have taken me seriously.) A blog post about masculinity is one thing. A whole book is a horrible thought. Feminism and women's studies are bad enough. Masculinism and men's studies are to be strenuously resisted! (Which is no criticism of those groups which exist to counter man-bashing in the media, universities and legal system.)

Anyway, that's all a digression. I suggested to him instead that we submit a proposal for a book on conversion, and I did a huge amount of work on the proposal. But, alas, they didn't think it would sell. (Maybe better, in the long run. This was a 'progressive' Catholic publisher, which would have been quite a mismatch.)

There is something mysterious about conversion, even when it comes to secular matters. The image of St. Paul dazzled by the light is an appropriate one. There always seems something irreducible about any conversion, something that can't be covered by any explanation, something that even the convert can't fully understand or articulate. One day, perhaps, I will write that book. In the meantime, I pray to St. Paul for many more conversions!

Posted by Maolsheachlann at 6:07 AM No comments:

John Waters (the Irish commentator, not the American director) sometimes seems a bit mad nowadays, but I still look at his "John Waters Unchained" email with interest. In a recent one he makes a point that has often occurred to me:
"In his 2011 book The Great Stagnation— How America Ate All the Low-Hanging Fruit of Modern History, Got Sick, and Will (Eventually) Feel Better, Tyler Cowen describes an America streaking ahead up to the end of the nineteenth century (free land and a host of technological breakthroughs like electricity, motor cars, air travel, railroads, harvesters, fertilisers, phonographs, telephones, household appliances, typewriters, tape-recorders, television and indoor plumbing) and then starting to slow down. ‘Today,’ he declares, ‘apart from the seemingly magical Internet, life in broad material terms isn’t so different from what it was in 1953. We still drive care, use refrigerators and turn on the light switch.’
"It’s true [says John Waters]. When I was a schoolboy, we would get asked to write essays from time to time with the title, ‘Life in 2000 AD’, in which we would invent fantastic scenarios in which we, or our descendants, would swish around in hovercraft, live on food pills and spend our holidays on Mars. Yet, apart from the strange devices we hold up to our ears, anyone who died around 1960 would not, on returning for a (very!) brief haunting visit, find our modern homes or streetscapes all that puzzling."

Me again. I don't know what moral to draw from this, if any. I'm rather grateful for it because I prefer continuity to change. But the difference between 1960 and today seems much smaller than the difference between 1900 and 1960. G.K. Chesterton wrote that, once telephones had been invented, all other communications technology seemed just a variation on the same thing.
I remember in the early nineties, virtual reality was meant to be the next leap forward but that still hasn't really happened. I suppose "touchless technology" is making a big difference-- certainly transforming libraries-- but still a long way from hovercraft and teleporters. I was even surprised at one library conference to hear that libraries are facing challenges when it comes to VIRTUAL memory, which I had presumed was effectively infinite.
Posted by Maolsheachlann at 8:50 AM No comments:

The Old Ads Are the Best...

Probably not, actually, but I did spend a nostalgic evening recently looking at advertisements that took me back to my childhood, or teens. I know I've mentioned most of them before.

I wonder how many of these I watched, or heard, while I was playing with plastic soldiers or building blocks? Sadly, the television was our hearth. But it was better than being hearthless.

Nothing brings you back like ads, because they belong so totally to the moment. They're repeated often enough to sink into your memory, but then you never hear them again for years and decades. So it's not like songs from the era which you might have heard dozens of time since.

This 1986 ad for Bórd na Móna, a state company that sells peat briquettes, is probably my all-time favourite ad. It makes me dream of a path Ireland could have taken; modern and prosperous, but still traditional and romantic.

When this 1990 ad  for Tennant's beer was shown in Ireland, the words "my land" were substituted for "Caledonia". It's a neat little story, and it's rare that you see patriotism (in the literal sense "love of country") portrayed in advertisements.

This ad (for Drifter chocolate bars, also from 1990) is funny and sweet. The character it portrays was probably hugely anachronistic even then. Despite it lingering in my memory for thirty years, I don't think I've ever had a Drifter bar.

Apparently the "cave-man" ads for Britvic fruit juice terrified me when I was young. I think I can kind of remember it. Here's one (the only one I can find) from 1983. It's hard to see what spooked me now. I remember them being visually a lot darker.

This 1984 ad about the dangers of domestic dogs savaging sheep (really) shows that Ireland was still an agricultural country back then. What kid would forget this one?

As the person who uploaded it says in the video description, everybody seems to remember this ad for the Electricity Supply Board from the 1980s.

The hardest thing to grasp about the past is that it happened one minute at a time, that it was as "thick" as the present. It's hard to realize that when we read history, but sometimes I find it hard to realize it even with my own memories. How often must I have seen each of these, for them to be so branded in my mind?

Posted by Maolsheachlann at 2:19 PM 2 comments: