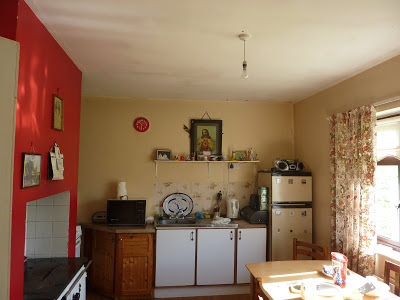 The picture above shows the kitchen of my uncle Willy's bungalow. You can see, right in the centre, the Sacred Heart picture that haunts all my childhood memories of visiting himself and his late wife, Kitty.

I spent a lot of time looking at that picture when I was a child. I would look at it while we all ate meals around the kitchen table and the grown-ups were discussing the mysterious, exotic matters grown-ups discuss.

Being a city boy, I felt that I was in the heart of the country (though Patrickswell is only a few miles from Limerick city), and that the kitchen was the heart of the town, and that the Sacred Heart picture was the heart of the house. The rendition of Christ is rather insipid and watery-- looked at objectively. But I'm afraid the picture has rather determined my taste in sacred art. I like my saints and holy figures to be languid, thin-boned, with eyes primly upraised to heaven. That is, I have the very vulgarest taste in sacred art, and I'm not one whit ashamed of it.

Visiting my aunt and uncle was always a culture shock to me-- it was like stepping into a different world. Their lives revolved around the farm, the GAA (my aunt called them the Grab All Association), the church, and-- that was pretty much it.

My uncle was and is one of the gentlest men I have ever met, but when he watched a hurling match on television, he turned into a demon. He could outswear a whole construction site when he got carried away by a game. He had been a hurler himself, and I always remember seeing him taking a swing at a tennis ball with a slender length of rubber pipe-- and hitting it unfailingly. (We had a tennis ball because myself and my little brother would play cricket with a pair of twins who lived nearby. We had aspirations.)

There were so many things about Patrickswell that were foreign to a Dublin boy. I had never experienced darkness like the darkness of the Limerick night. I would look out at the window of our bedroom and marvel at the almost unrelieved blackness of the view outside. It was scary and exciting at once.

My aunt used a stove to cook. A stove!

Walking for almost an hour to get to the nearest shop was also a novel experience, and even as a boy, it started me thinking that modern life might be rather too convenient, and too focused upon spending money. Walking so far to get to a shop seemed strangely right.

I was always struck, when my uncle brought us for drives, with the way the country drivers invariably raised a finger to each other as they passed. (No, not that kind of finger. A friendly finger.) This, too, struck me as the Way Things Should Be All Over.

Visiting my uncle's farm was, in many ways, like stepping back in time. I can remember my uncle agreeing with another local man that the prophecies of Saint Colmcille were coming to pass. I can also remember earnest discussions of Biddy Early, the famous local healer who has been remembered as a witch. At this time, a curse she had supposedly placed upon a hurling team was still considered to be in operation.

It seems a strange paradox that people who get their hands dirty with the elemental, earthiest aspects of life-- people who are quite literally down to earth-- are those also those who are most absorbed by the spirit world. The supernatural always seemed to hover over my aunt's farm. I can remember one night when my uncle, sitting in his front parlour, was telling us ghost stories, the electric lamplight shining upon his face. Suddenly the lamp went out and we were plunged into darkness. I am sure it wasn't a put-up job on his part. He isn't that kind of guy.

Another time my aunt told me a creepy story about the wallpaper in the spare room-- the room where me and my mother and my brother would sleep on our visits. She told me-- or at least this is how I interpreted what she said, but the story seems so odd that I've wondered if I didn't misunderstand her-- that somebody had seen an old man's face by staring into the wallpaper.

I took this to mean that this person, by simply staring at the floral pattern on the paper, had suddenly made out an image resembling an old man's face in the pattern itself. I did not interpret it as meaning that a ghostly vision had superimposed itself on the wallpaper, or anything like that. But the weird thing was that the first idea-- the perfectly naturalistic one-- seemed every bit as scary to me as any more uncanny possibility.

I can also remember being shown a rock which contained the footprints of the Devil and St. Brigid. I was rather sceptical of these claims, but the diabolical footprints were quite convincing-- they were tiny and crow-like, but somehow that only made them spookier.

My aunt had a pile of magazines in the bedroom in which we stayed. Many of these were glossy, trashy women's magazines.I remember one true-life story about a schoolboy who had been beaten to death because two of his class-mates had decided they wanted to kill somebody and, since the boy had no friends, nobody would miss him. I was particularly struck by this because I was a lonely boy at school.

Another story in these glossy magazines described the making of Michael Jackson's "Thriller" video, and the fears of some of his (unnamed) friends that he was Disturbing Dark Forces and might come to grief. I remember walking into the morning sunshine, after reading that piece, and shivering in the broad light of day. A daylight chill is the most delicious chill of all.

Memory makes collages. Those trashy magazines seem all of a piece with the birdsong and the smell of the soil and the quietness of my aunt's farm.

She also had more decorous magazines, such as Ireland's Own and Ireland's Eye. These are popular Irish magazines full of nostalgic accounts of times past, gentle short stories, and general knowledge features-- stuff like the wealth of the Sultan of Brunei or the invention of the bicycle. But it was one of these magazines that gave me the biggest scare of all.

One night I remember coming across an article, in Ireland's Own or Ireland's Eye, about the third Secret of Fatima. The writer had allowed himself plenty of room for speculation and the gist of the article was that the (then still unrevealed) third Secret pertained to the end of the world. Furthermore, it was going to happen very soon.

Being a child of the Cold War, I was already rather fixated on the possibility of a nuclear holocaust, so reading this article-- a printed article in a magazine, how could it not be true?-- sent me into a panic. I can remember lying awake all night, in the darkness, listening to the breathing of my mother and brother, waiting for the bombs to fall. It was our last night in Limerick and somehow I felt that, once I was back in Dublin, I would be safe. The Third Secret of Fatima would be powerless against the noise and light of the capital.

My uncle and aunt had only one joke each, and they told them every time they visited. My aunt's was: What did the bra say to the hat? You go on a head and I'll give these two a lift. This joke was invariably told when my mother was present and so was hideously embarrassing. My uncle's joke was: Why did the hen peck the pot? Because he couldn't lick it. I still don't get this one, but it delighted my uncle no end.

I had a brief religious conversion during one trip to my aunt and uncle. Attending Mass with them really shook me up, since everybody in the town went along, and since the church itself was bright and colourful and had that indefinable sense of presence which pervades well-frequented places. I remember the text "I am the vine, you are the branches" set my imagination alight. Somehow (I can't remember how) I acquired a miraculous medal and a set of rosary beads, on this same trip. I can remember my aunt, as I was leaving, urging me to keep praying and remain true to my faith. Alas, this conversion was a very brief affair.

When I eventually returned to the same church, it was to attend my aunt's funeral. This was many years later-- only five years ago-- and I was becoming more and more conservative at the time. Now I was all for tradition, I was all for rural life, I was all for community, I was all for ritual and ceremony-- but it struck me, as I was listening to the priest describing my aunt's work with the church choir and her constant attendance at Mass, that the "traditional ways of life" that I was coming to prize so much were rooted in the actual physical act of going to Mass every Sunday. This sobered me greatly, since I was an atheist at the time. It seemed as though everything I loved was based upon something I couldn't believe. I would forever be warming myself at another's fire.

All through those years, God was whispering to me. It took me so long to hear. So very long.
Posted by Maolsheachlann at 2:24 PM