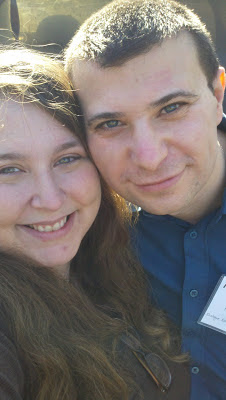 The photo aboves shows me and my fianceé Michelle immediately after last weekend's "Engaged Encounter" retreat (a Catholic initiative), which took place in the Holiday Inn hotel beside Richmond Airport in Virginia. And we are all smiles because the retreat turned out to be well worth it-- I would even say it was one of the best experiences I've ever had.

When I told my father I was going on a pre-marital retreat, he scoffed. "Me and your Ma never did anything like that", he said. And it is true that I would do well to achieve a marriage as happy and (mostly!) harmonious as that of my parents, who had no formal preparation at all.

In fact, I shared something of my father's scepticism, and I have to admit that I was rather dreading the retreat. I expected lots of workshopping, role-playing, public speaking, silly "ice-breaking" games, and-- basically-- embarrassment.

I couldn't have been more wrong. I learned that Engaged Encounter is a very serious, focused, faith-filled event, and that nobody was going to push me to participate, or chivvy me into "sharing with the group". Discussions remain private between the spouses-to-be. If a couple just wants to turn up and go through the motions, they could do that. But it seems to be the case that, when you treat people like adults, they tend to react in the same spirit. There were some sixteen couples on the retreat we attended, and all of them seemed to take it seriously.

The weekend began on a Friday evening, continued through all of Saturday, and finished in the afternoon of Sunday. As well as this, attendees are expected to attend Mass at 7:30 a.m. on Saturday and Sunday (the team that presented the retreat included a priest). Yes, it is intense, but personally I liked that. I've always loved immersive experiences. (And the Mass itself-- celebrated in the hotel-- was beautiful, as improvised Masses usually are, since they fill humdrum settings with a sacramental glow, and the simple setting concentrates the mind upon what is actually happening.)

Not only does the retreat run for a good forty hours or so, but that forty hours is conducted with quite a sense of urgency. This was also a good thing, as it stopped the retreat from becoming boring.

The retreat was given by two married couples, along with the priest. Engaged Encounter is an international phenomenon, but it has managed to avoid having a single paid employee. The fact that couples are willing to sacrifice more than forty hours of their lives to helping others-- and to openly discussing their home lives and difficulties, not avoiding the subject of physical intimacy-- is quite staggering.

It's hard to think of any relevant topic that was left out during the weekend. Money, family, faith, communication, intimacy (which was not simply a euphemism for sex but took in a lot more), Natural Family Planning, decision-making....it was all there, along with a lot more besides. The general format was that, after listening to presentations by the priest and the married couples, the engaged couples went to separate rooms to write down their thoughts on the topics raised, and then got together to discuss them. It's a good format; formal and focused, but also relaxed. There was also time for general discussion, for prayer, and for shared meals.

It was a very Catholic weekend, even though it is not restricted to Catholic couples. One of the reasons (one of the many, many reasons) that I'm a Catholic, and that I love being a Catholic, is that the Catholic Church is, as far as I can see, the only thing in this world that truly is catholic-- in the sense of being universal, all-encompassing, fully-rounded. Because the Catholic Church has never let its creed become something private, or something purely "spiritual" and cut off from all the messy and mundane aspects of life, it remains the one great philosophy that can cover a man like the sky. Not only does the Church span every continent and culture; not only does it reach its roots back to the apostles, and unite generation with generation; but it makes sense of the whole of a man's (and a woman's) life, too.

I don't know of any other creed, secular or religious, that finds so much meaning and importance in every aspect of life-- and in every life. It prizes human life, in all of its forms, from its very first moment to its very last. Just take one example (if I may be allowed a digression)-- take all of the suffering souls out there who have met with some accident or disease that has robbed them of their economic usefulness, and of what the world calls their "quality of life". Society, in its sentimental or soft-hearted moods, may pay lip service to the human worth of people in such a predicament. But what conclusion, really, could they draw from the images they see on book covers, magazine covers, television screens and advertisements? Can somebody who is condemned to a life of paralysis believe that he or she remains an actor in the drama of life?

Probably not, if they only look at the magazine covers and television screens. But there is one place where such people will see their own drama echoed and honoured-- on the Crucifix above a Catholic altar, and in the lives of the saints, and in the whole thought and prayer and striving of the Catholic Church. And there is not a single state of life into which a man might fall-- not disease, not danger, not crime, not drug addiction, not failure, not anything-- in which the Catholic creed would cease to apply to him, would cease to take an interest in him, would disqualify him from playing a heroic part. As far as I can see, Catholicism is the only light that reaches into every crevice of human existence. You might say that you're never alone with a saint.

One thing about the Engaged Encounter struck me more than any other-- it occurred to me again and again, as a matter of fact. We were sitting in a hotel conference room, in several rows of chairs, listening attentively to a panel of very earnest and business-like speakers. It was much the same format as a press conference, or a business seminar, or a committee meeting. And it seemed positively weird to me that, in such a formal and focused format, we should be discussing things like lifelong happiness, lifelong commitment, emotions, aspirations, values, family, prayer and the meaning and purpose of life. I expect a scenario like that to be devoted to more grown-up matters, like yoghurt sales, or sanitary engineering, or marketing techniques, or at the furthest stretch (since man cannot live by bread alone, and sometimes beliefs have to break through) Marxism or environmentalism or consumer's rights.

But to have a serious discussion in a hotel conference room about something as vague and uncompartmentalised as life, love and eternity-- who does something like that?

When the end of the forty hour marathon came, I found myself feeling more than a little sad. After having taken such an emotional ride with these people-- not really strangers, anymore-- it was poignant to think that we would never meet as a group again, even if individuals and couples did keep in touch by email, or meet up in person (and there were plenty of contact details being exchanged). I'd like to think I wasn't the only one who felt this-- certainly, as we said our goodbyes, there was quite a powerful atmosphere in the room.

And so, when all those faces fade into the background and become faint memories, what about the woman who left the hotel with me? Did the retreat help me and Michelle?

Obviously, it's impossible to say for sure yet, but I'd like to believe that it has, and that it will. God grant that it be so!

Postscript: I was fascinated to discover a Gideon Bible in one of the drawers in my hotel room. This is the first time I have encountered a Bible in a hotel room. I don't know if it's done in Ireland or England, but I don't think I've ever come across one-- but then again, my experience of hotels is not huge, and maybe they were there but I just didn't look. Does anyone know what the norm is in Ireland and England? I really hope that militant atheism doesn't do away with this-- I can easily envisage atheist societies organizing campaigns to complain about the practice. But I hope not, because it seems like a nice tradition, no matter what your beliefs might be.
Posted by Maolsheachlann at 10:57 AM