How to Talk to Chicks 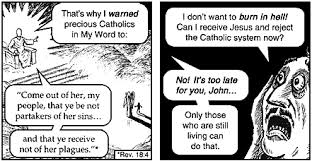 Have you ever heard of Jack Chick? If I tell you he’s a writer of comic books, you might get the wrong idea. The kind of comic books Mr. Chick writes are religious in subject matter, and very far from the spirit of the Beano or the Dandy. They are written from an Evangelical Christian, born-again perspective. To say that they pull no punches wouldn’t even begin to do justice to their outspokenness. Mr. Chick is utterly uncompromising in his assertions—and one of his assertions is that the Catholic Church is the Whore of Babylon described in the Apocalypse of St. John.

According to the website Catholic Answers, some other interesting claims made about the Catholic Church in Chick tracts include: that the Jesuit order was responsible for the American Civil War and the assassination of Abraham Lincoln; that St. John Paul II was a communist (a spectacularly unsuccessful one, we must conclude);  that the Vatican has the name of every Protestant stored on a ‘big computer’; that the Catholic Church controls the Mafia, international banks, the Masons, and the New Age movement; and that 68 million people were murdered by the Inquisition. Of course, it goes without saying that anyone who dies a Catholic is buying himself a one-way ticket somewhere very hot, with no air-conditioning.

This was the theme of the Chick Tract I was handed in Dublin’s O’Connell Street on Saturday, not far from the Spire. Four or five men, in their thirties to fifties, were handing these tracts out to passers-by. I took the tract, not realising what it was, and smiled encouragingly at the evangelist. After all, he was proclaiming the gospel of Christ as he understood it. 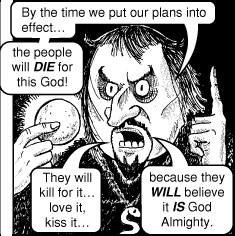 When I glanced at the thing, as I was walking away, I found myself faced with an uncomfortable dilemma. I’m not the kind of extroverted person who finds it easy to debate with strangers in the street. But how could I ignore this challenge to my faith? I turned back several times before I was eventually handed another tract and took the opportunity to argue with my would-be saviour.

I have to say that he was quite pleasant. He was a Hispanic man who might have been in his late thirties or early forties. I began by asking him where he thought the Bible, which was the sole source of the arguments against Catholicism used in the tract, actually came from. He dodged this question, and our impromptu debate zigzagged through familiar Catholic vs. Evangelical terrain; prayer to saints, Our Lady’s virginity, Christ’s words to St. John from the cross. Then (to my relief, I admit) I saw my bus coming, we shook hands, and I ran to catch it, followed by his “God bless you.” 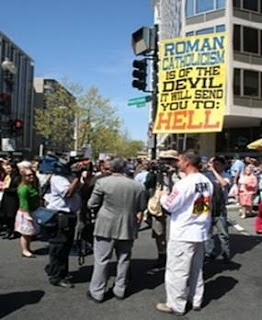 In any meaningful definition of the term, Chick tracts are ‘hate speech’. (In fact, the Hell-bound character in the tract I was handed makes this very accusation, in a confrontation with a street preacher.) If (for instance) casting doubt upon the moral legitimacy of homosexuality can be construed as hate speech, likely to incite prejudice or violence, and to inspire suicidal feelings in young homosexuals, surely Chick’s venomous little comics easily fall within the same category. And yet I would not dream of complaining that they are so freely circulated, or seek to suppress them in any way.

In fact, I will go further. I have more admiration for the distributors of Chick tracts, who take the words of Scripture seriously (even if they so disastrously misunderstand them), than I do for many champions of a vague, nebulous Christianity. Chickites start from the datum of the Bible. Too many Christians today start from the presumption that God must, simply must, conform to their own moral intuitions, and that the Bible and tradition is to be shoe-horned or explained away to conform to these, as well. 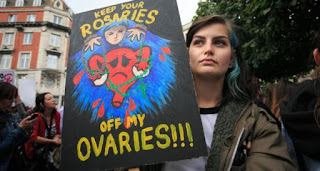 As I write this, the results of the European and local elections are being announced. The government parties took a hammering and the Labour party came off the worst. The commentators on radio and television have attributed this entirely to the austerity policies that the government has imposed. To my knowledge, only Shane Coleman on Newstalk suggested that the legalisation of abortion might have played a role.

I would like to believe that a great deal of the punishment that the electorate inflicted on the government parties, and on the Labour party in particular, is a backlash from the abortion legislation. I’m rather sceptical about this, however. Why? Because the big winners of the elections were Sinn Féin, whose record on abortion is lamentable. They supported the so-called Protection of Human Life Bill which last year made abortion legal for the first time in the history of the State. Sinn Féin TD Peadar Toibin was suspended from the party for voting against the Bill.

Of course, it could be that the surge in support for Sinn Féin and the collapse of the Labour Party vote are separate phenomena, that all the pro-life voters who abandoned the government parties transferred their support to Fianna Fáil or to independents. (There was also a huge increase in support for independent candidates.) But it’s hard to believe this, as it seems very clear that Sinn Féin have taken over the Labour Party vote.

What is the problem with the Catholic voter in Ireland? Though it’s difficult to find statistics for overall Mass attendance, over eighty per cent of Irish people declared themselves Catholic on the 2011 Census, and an MRNI poll commissioned by The Irish Times in 2012 found that over half of Irish Catholics attend Mass at least once a month. How is it, then, that a pro-abortion policy does not equal political suicide in this country? It’s easy to blame our bishops and priests for not preaching on this issue, but ultimately the blame must lie with all those ordinary Mass-goers who have not sufficiently formed their consciences.

A Voice from Heaven

Being something of a contrarian, I didn’t acquire a mobile phone until 2004. (I remember asking the man in the shop if the phone he was showing me could send text messages, and the withering look I received in reply.) About a year ago, I took a further bold step into the future and bought a smartphone. Only recently did I work out that the smartphone could be used to play music, and only still more recently did I start to listen to internet radio over this wondrous and compact device. 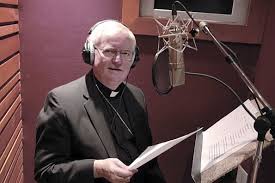 Of course, I listened to Catholic radio. I downloaded the apps of two American Catholic Radio stations, The Station of the Cross and Ave Maria Radio. There are a bewildering number of American Catholic radio stations, but most of the content seems to be syndicated—very often both of these stations are playing the same show at the same time. (It’s always seemed very odd to me that radio programmes are called ‘shows’, by the way.)

American Christianity and American Catholicism fascinates me. Maybe it’s something to do with the voyage of the Pilgrim Fathers, but there is an American ease with all things supernatural which I envy. When I listen to someone talking about God or Jesus in an Irish accent, or an English accent, they seem to be discussing an idea, a theory. There is a certain tentativeness, a certain awkwardness in the very way they pronounce the syllables.

But Americans are different. The words ‘God’ and ‘Jesus’ roll off their tongue with complete naturalness, as though they were talking about potatoes or boots or doughnuts. 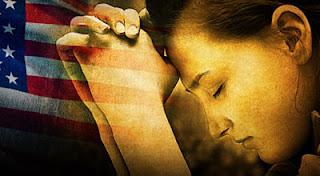 As well as this, we have developed, in this part of the world, a kind of all-consuming irony or flippancy that makes it difficult for us to talk about God. I notice this when I watch Americans (or Africans) at Mass. They are very often demonstrative in a way that Irish Catholics are not—for instance, extending their arms during the Lord’s Prayer. This makes me cringe, but why should it?

Even those of us who choose to be outspoken about our religious beliefs, in this part of the world, find ourselves becoming defiant rather than natural, when it comes to the way we talk about God. I’m reminded of the words of C.S. Lewis, when he described the attitude of English people to ritual and ceremony: “They go through it lumpishly and with a certain mixture of defiance and embarrassment, as if everyone felt he was being rather silly and was at the same time willing to shoot anyone who said so.”

But it isn’t just the American ease with spiritual matters that has kept me hooked to these radio stations in the past week. It’s an ever-increasing fascination with the vision of the Church as the body of Christ, as a temple formed of living stones, as a living, breathing thing rather than an idea.

There are a lot of inspiring quotations out there on the subject of ideas. Perhaps the most famous is Victor Hugo’s “There is one thing stronger than all the armies in the world, and that is an idea whose time has come.” I imagine that the glamour that hangs over what we might describe as ‘the idea of ideas’ became especially strong in the nineteenth century, which was the great era of ideologues.

But, in truth, ideas are thin, wispy things. As Cranly says in Joyce’s Portrait of the Artist as a Young Man: “Every jackass going the road thinks he has ideas.” A lot of the time, these jackasses are crazed, emaciated independent scholars who spend their lives in the reading rooms of libraries and produce huge folios that moulder on a shelf forever more. But now and again, one of these jackasses gets the world to actually try one of their ideas—think of a Karl Marx or an Adolf Hitler or a Jean Jacques Rousseau. The consequences are nearly always horrendous.

Catholicism is not an idea. It is a living thing. The Catholic Church came into existence in the Upper Room in Jerusalem on the day of Pentecost. Since then, it has lived and grown from moment to moment—a thing with a pulse and a body and a personality. “Touch me and see for yourselves”, said Christ to the disciples, after his Resurrection. “A ghost has no flesh and bones as you can see that I have.” 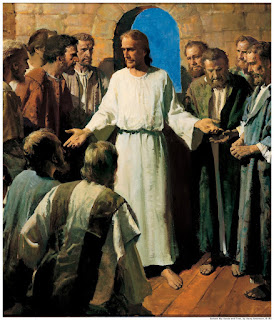 The heart of the Church, of course, is the Eucharist, the liturgy and the sacraments—the estimated 350, 000 thousand Masses that are celebrated every single day, in ancient cathedrals and sleepy suburban churches and in a hundred other settings. It’s the baptisms and confirmations and weddings and confessions and ordinations that are also happening every day of the week.

But the life of the Church is so much broader than that. It’s every Rosary said, every pilgrimage, every Bible study class, every minute of Eucharistic Adoration, every family praying together, every individual praying alone. It’s all the hours and hours of women’s shows and current affairs shows and phone-in shows on Catholic radio stations. It’s all the Catholic blogs on the internet. I hope that even half-witted columns like this one might be considered a part of the life of the Church.

Trying to get the world to understand this conception of the Church—as the mystical body of Christ, rather than a transmitter of a message, a school of ethics, or some kind of encounter group—is, I think, one of the great challenges facing us as we interact with a culture that is increasingly mystified by Mystery.
Posted by Maolsheachlann at 4:36 AM