I've never really been much of a novel reader, but one novel which greatly appealed to me in my teens was Nine Princes in Amber by Roger Zelazny. It's a fantasy novel, and the Amber of the title is a city which is the only "true" place in existence. Every other world, including out own, is a reflection of some aspect of Amber.

The central character, Corwin, wakes up in a hospital on present-day Earth with no memory of who he is. He leaves the hospital and pieces together his own story through various clues. He slowly realizes he is a member of the royal family of Amber, and he resolves to depose his elder brother from its throne. (There are a whole series of books about Amber, and later on I read them all, but I only really liked the first.) 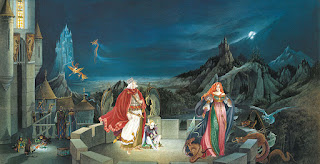 But the idea of Zelazny's Amber thrills me, too, and this is what this blog post is about.

All my life I've been beguiled by the idea of a world, or a state of being, where life is elevated. I don't know what better word to use than "elevated", because this yearning is very specific and not be confused with other yearnings.

It's not a yearning for a utopia, because it doesn't seek to escape from evil and struggle.

If I use words like "humdrum" and "quotidian", that also gives the wrong impression, because this yearning is not a yearning to escape from the ordinary. In fact, I've always loved the ordinary with all my heart.

Banal is a better word than 'ordinary' here. The ordinary can contain the sublime, but the banal never does.

Perhaps Nietzsche's concept of eternal recurrence is the best way to approach it. Nietzsche said the ultimate affirmation of life would be to yearn for our lives to be repeated eternally. As a Christian, I obviously don't subscribe to that, but I do (involuntarily) apply the criterion of "eternal recurrence" to each moment.

I think; could this moment be frozen timelessly in a picture, or a poem? Is there something eternal within it? Now, obviously that can be a moment that is very ordinary, or one that is very special. It can be a kiss or standing at a bus stop on a cold day.

I've mentioned my fascination with photographs, especially enigmatic photographs...I constantly imagine I'm in a photograph when I am out and about. A photograph that is several decades old.

There are moments, however, that seem altogether devoid of this potential to be eternal. Bitching about one acquaintance to another, for instance. Small talk. Sarcasm. Channel-hopping. Lingering in a museum gift shop. Reading trashy magazines. That sort of thing.

Life is a well of delight; but where the rabble also drink, there all fountains are poisoned.

To everything cleanly am I well disposed; but I hate to see the grinning mouths and the thirst of the unclean.

They cast their eye down into the fountain: and now glanceth up to me their odious smile out of the fountain.

And it is not the mouthful which hath most choked me, to know that life itself requireth enmity and death and torture-crosses:—

But I asked once, and suffocated almost with my question: What? Is the rabble also necessary for life?

Are poisoned fountains necessary, and stinking fires, and filthy dreams, and maggots in the bread of life?

Of course, Nietzsche expressed this concept in typically aristocratic terms, and in my anti-populist youth I would have agreed with him enthusiastically. But even now, I sympathize with these words, although with the understanding that "the rabble" is me....the rabble is all of us, all too often.

Whenever we cheapen or banalize or coarsen life, we are the rabble.

But back to Amber. The thing I liked most about Amber was that Corwin only remembers it gradually. When someone first mentions the name to him (it's his sister, who doesn't realize he has lost his memory), it fills his soul with an unspeakable yearning and he doesn't know why. Slowly, he begins to remember it as the story goes on.

This is similar to my own yearnings for an "elevated" world. There's something inescapably indirect about such yearning.

When I look at my reflection in a Christmas bauble, and see myself and the room around me transfigured into something else, I seem to see Amber.

When I see out a back window through a front window, I seem to see Amber.

When I look at the frozen figures in a snow globe, I seem to see Amber.

I've often quoted a line I love from the poem "The Burning of the Leaves" by Laurence Binyon-- "The fingers of fire are making corruption clean". This yearning is a yearning for such a refining fire, in oneself and the world around.

I want to make clear that this isn't really a matter of morality. I'm not talking about the fires of Purgatory, and Amber is not Heaven. I'm talking about an attitude to this world.

Translated into social and cultural terms, this is a yearning for tradition, ceremony, ritual, solemnity, and splendour. For monarchy, cultural nationalism, hierarchy, chivalry, festival, national and regional identity, venerable institutions, public monuments, the preservation of rural life, and so forth.

It's what makes me wince when I see tacky advertising, or casinos, or trendy overpriced restaurants, or zany humour.

I yearn for Amber in cultural terms, too. As I've mentioned, I've been reading The Idylls of the King recently-- reading it, and reading about it. Whenever I read poetry, I feel a contempt for prose and for the primacy of prose. I get to thinking that we should read all prose as bashfully and apologetically as we read murder mystery novels. I feel ashamed of myself for reading so much prose.

I suppose my yearning for Amber is a yearning for a life that is poetry rather than prose-- and not just any poetry, but heroic verse like Idylls of the King.

Of course, we can never live in Amber. But we can try to get closer to it, to breathe its air.
Posted by Maolsheachlann at 5:56 AM