It's Tuesday! And, on this blog, that means it's time to talk about poetry!

Well, not so much, to be honest. Yes, I let my fledgling Poetry Tuesday tradition slide recently.

But maybe that's not such a bad thing, since a tradition has overcome an important hurdle when it languishes and revives for the first time.

Anyway, today's Poetry Tuesday post is just a quick post about the poetry jukebox which was recently installed outside my own workplace, the James Joyce Library in University College Dublin. Here is a picture of it. 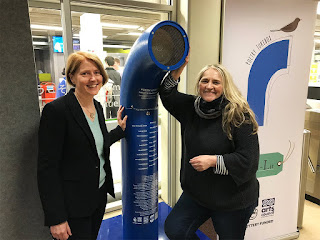 It was a bit gingerish about using it, since I'm always expecting some smart-alecky comment from someone passing colleague. (I don't even like taking mobile phone pictures in public, selfies or otherwise, as I'm so self-conscious about onlookers.) But one day, after work, I pressed the button and listened to a poem written and recorded by a contemporary poetess. It wasn't a good poem, but I'm not too worried about that. I saw that it also had poems by dead female poets.

One of the women pictured, Maria McManus, wrote this about the idea of a poetry jukebox, in an Irish Times article:

Words have power. In print and broadcast news in the North, in this past week alone, came reports of graffiti on walls that read “N ----rs out”; families fleeing sectarian threats; swastikas daubed on walls; a pig’s head left outside a community centre used by Muslims; anti-Muslim slogans sprayed across the doors.

Another day, another time, another place, it would be homophobic slogans. Misogynistic graffiti, though prolific, rarely makes the news, but a Belfast cafe caused a stir this week when it claimed “You can beat the wife, but you can’t beat a £5 lunch”. This was on a sandwich board sitting in the street. The owners hit back on social media, saying people were over-reacting, it was just a joke, people were too sensitive. Blah, blah. Eventually, under duress, they apologised. Eventually.

Ms McManus goes on: "This is our context and it becomes then all the more important for us to animate and occupy public space and public discourse with something quite contrary." It makes me wonder what she thinks of Philip Larkin, Rudyard Kipling, John Betjeman, Kingsley Amis, and other great poets who leaned to the right in one way or another.

Poetry, including the best poetry, can be a vehicle for views and opinions of every sort-- though it is true that good poetry usually avoids the shrilness and shallowness of outright propaganda.

Nevertheless, I could not agree more with her final lines: "Through the Jukebox, we hope that we can connect with a wider audience for poetry – not just the ones who will go to a reading, or buy a poetry book, but other people – people passing in the street. The curious. This is about normalising poetry. Why shouldn’t it be part of everyone’s everyday life? Why shouldn’t it nourish their soul and their imagination?"

(Rather sadly, nobody was sufficiently moved by the article to leave a comment.)

Posted by Maolsheachlann at 7:49 AM