My Latest Article in The Burkean, and in Ireland's Own

My latest article for The Burkean is a defence of conservatism against its critics on the right. The comments on the article, and on social media, were mostly in disagreement.

I'm somewhat disquieted by the radicalization of many on the right, especially among young "red-pilled" right-wingers. Some of this is trolling, but I don't think it all is. As with all online discourse, it's hard to tell whether it's simply a vocal minority, or whether it represents a wider shift of opinion.

I also have (to my great pleasure) an article in the Christmas edition of Ireland's Own, on the ghost stories of the English author M.R. James. Montagu Rhodes James (1862-1936) was an English academic who wrote ghost stories as a kind of sideline to his scholarly work. They were originally told in his college rooms at Christmas-time, and they have traditionally been broadcast on BBC TV and radio during the Christmas season.

I have many happy memories of reading the Ireland's Own Christmas edition, down the years, so I'm proud to have a part in it this year. 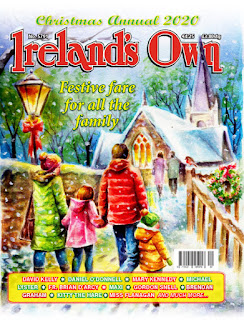 Posted by Maolsheachlann at 7:12 AM