The Fears of an Eighties Kid: A Blog Post from 2018

In this post, I continue to count down to Friday's ten-year anniversary of this blog by rerunning a blog post from each year. We've now reached 2018. This post seems very appropriate to the Covid era!

I've started reading Lord of the Rings again. It's a book I've read at least twice in my life-- once when I was very young (perhaps as young as seven), and again in adulthood. Despite this, I don't remember the details of the plot that well-- not all of it, at any rate.

I'm very familiar with the opening chapters, though. I read the first half of The Fellowship of the Ring again and again in my childhood. The second chapter, "The Shadow of the Past"-- the exposition-heavy chapter where the wizard Gandalf explains to the protagonist Frodo the true nature (and peril) of the magic ring he has inherited-- has always been one of my favourite passages of fiction. The scene is set in a cosy front room on a sunny morning, but Frodo is chilled to the soul by Gandalf's story. "Fear seemed to stretch out a vast hand, like a dark coud rising in the East, and looming up to engulf him." 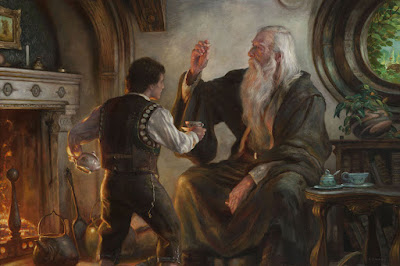 Reading those lines brought me back to my childhood, and the fears of my childhood.
It was one memory in particular that sent me into this reverie. I used to visit the farm-house of my aunt Kitty (RIP), who lived in county Limerick in the south-west of Ireland, for my summer holidays. She was an avid reader of trashy magazines and tabloid newspapers, and I gorged on them when I visited her.
One morning, reading such a tabloid, I came across a report that an experimental laboratory had somehow managed to mix cancer with a virus. The newspaper report suggested it was only a matter of time before this virus escaped from the laboratory and became a pandemic. I remember standing under the eaves of the house, after reading this, and being gripped by fear. Even then, I was conscious of the contrast between my bucolic surroundings-- a quiet farm on a summer's morning-- and the apocalypse I was imagining. It was very similar to the contrast between Frodo's cosy home and Gandalf's terrifying tale.
Young as I was, I knew that tabloids were sensationalist, so it didn't take me long to get over this scare. But something about my aunt's farm seemed very conducive to getting the spooks. It happened on many other occasions.
On another occasion, I'd read a story about Michael Jackson's "Thriller" video. According to the story, Jackson's "spiritual advisor" had warned him that he was putting his soul at risk by playing with demonic forces. The magazine showed a large colour still from the music video, which was undoubtedly creepy. Again, I have a vivid memory of standing outside the house on a sunny morning and getting a cold blast of "daylight horror".
My aunt and uncle told me a story (true, for all I know) that an old man's face had been seen in the wallpaper of the bedroom in which myself, my brother, and my mother were sleeping. The way I interpreted this was that, upon staring into the wallpaper, the pattern "resolved itself" into an image of the old man-- much as you suddenly "see" a hidden image in a visual riddle. Somehow, this seemed much creepier to me than the other interpretation (which only occurred to me years later)-- that a photographic image simply superimposed itself over the wallpaper. I avoided looking at the wallpaper.
My biggest Limerick scare came upon reading an article about the Third Secret of Fatima- I think it was in Ireland's Eye magazine. The article suggested that the Third Secret of Fatima predicted the end of the world, and that it was going to happen in 1992-- the very year in which I read the article.
I remember lying awake that night and waiting for the bombs to fall. We were going to return to Dublin the next day. I desperately wanted to get back to Dublin, as I knew the fear of apocalypse would seem silly there. But in the silence and darkness of the Limerick countryside, it felt very believable.
Nuclear war was a terror which haunted my childhood and early teens. Doubtless every eighties child experienced this, to some degree or other. Somewhere I encountered the claim that, in the event of a nuclear attack, the first thing that would happen would be a black-out. Every time there was a power-cut, I was terrified it was the precursor to a nuclear attack.
My fear reached its height on the first night of the 1991 Gulf War. I was thirteen years old. Some sadistic adult had told me that, if the Americans attacked Iraq, "You can put your head between your legs and kiss your ass goodbye". I can vividly remember the newsflash in which the invasion was announced. It came during a football broadcast, and the first image was an American soldier in silhouette. 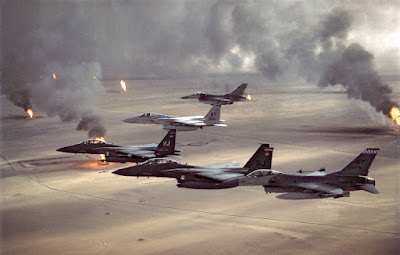 That night, I lay awake until morning reading David Copperfield for the first time. "This world was so wonderful for so many centuries", I kept thinking, as I read. (Even the adversities of David Copperfield's early life seemed gloriously romantic, compared to the imminent apocalypse.) "Why are we going to destroy it all? How did it ever come to this?".
When the bombs didn't fall the first night, my fears quickly evaporated.
(I can barely imagine the terror that the recent false alarm in Hawaii must have created.)
I had many dreams about the announcement of a nuclear attack on television. The sheer inevitability of the thing was the greatest horror-- there would be no chance of escape, not even an outside chance. It would jut be a matter of waiting to be incinerated. I often had nightmares which ended with the bombs visible outside my window.
I wonder how many of my readers have seen "A Little Bit of Peace and Quiet", the eighties-era Twilight Zone episode in which a housewife comes into possession of a medallion which can freeze time? Spoiler alert....in the final moments of the episode, she freezes time just as a nuclear missile is about to hit her town. To me, that was blood-curdlingly terrifying, too terrifying for fiction.
It wasn't only nuclear war that petrified us in the eighties, of course. It was also AIDS. (Back then, the name of the dread disease was always rendered in capitals.) I was only really beginning to learn about sex when AIDS came on the scene. I remember reading that it affected both homosexuals and heterosexuals, and I had no idea what those words meant-- I assumed that a heterosexual was someone who slept around, and that a homosexual was someone who only had sex with a single partner. I think this was a pretty good guess, in retrospect.
I can remember one Irish current affairs show in which a panel and a studio audience were all discussing AIDS. It gave me a sense of crisis, of something enormous unfolding, a civilizational threat.
The real horror of AIDS was that one single drop of HIV-infected blood was a death sentence. I spent a long time thinking about this. I remember wondering whether, if one were pricked in the hand with a HIV-infected needle, one would have time to chop one's own arm off in order to stop the spread of the virus through the bloodstream.
I envisioned a future where the vast majority of people were HIV-infected. It seemed inevitable. The public information campaigns did a good job of explaining that you couldn't catch it from kissing or from toilet seats-- but how many other ways that seemed to leave! And besides, could you really trust such assurances?
In sixth class (when I was twelve), I heard the urban legend of AIDS Mary-- the woman who leaves the grisly message "Welcome to the world of AIDS" for someone she has infected. In the version I heard, I'm pretty sure it was some kind of infected booby-trap rather than a sexual encounter. But I'm pretty sure I heard it in the presence of our teacher, and I don't remember him dismissing it.
This ad (which was broadcast in Britain, but we got the British TV stations) only made the disease more terrifying. It still gives me the shivers. What were they thinking?
I can't remember worrying much about the hole in the ozone layer, which was the ecological scare of my childhood. This despite the fact that my teacher in fifth and sixth class (when I was eleven and twelve) was something of a hippie, and wrote a school play dedicated to the subject-- a musical, as a matter of fact. I was one of the extras. The narrative shifted between the present and the future, and the extras (who appeared in the future scenes) were a chorus of zombie-like creatures who were all dying of skin cancer from the sun's ultraviolet rays...or something like that. It was a grim production, but it won us first prize in an inter-school drama competition. I don't remember being in the slightest bit bothered by its subject matter. Was I sceptical, or did it just seem too far away in the future to worry about? I'm not sure.
Not all my fears were naturalistic. One evening, sitting in a field with a group of local kids and listening to them tell scary stories, I heard that Satan himself could be summoned if you said the Lord's Prayer backwards. I lay in bed that night desperately trying not to say the Lord's Prayer backwards, but my mind kept forming the first few syllables nonetheless. I despaired at the thought of going through life without ever thinking my way through the whole thing, in spite of myself.
Did I really believe that this would summon the Devil? I don't think so. I was in my early teens at this stage. But fear is a strange and perverse thing. 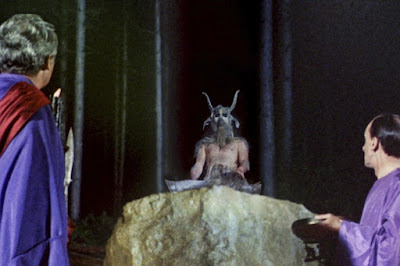 Much earlier, in my childhood, I can remember looking at a pile of stuff which had been covered with black plastic, in our hall, and knowing that there was nothing underneath. But I was still scared that there was.
In my first year of secondary school, when I was thirteen, I heard one boy tell another boy (as we were changing back into our clothes after P.E., or gym class) that deep-sea divers excavating the wreck of the Titanic had seen these words written on its hull: LEAVE US IN OUR WATERY GRAVE. I can remember feeling a physical chill as I walked home that afternoon...but it was a rather pleasant one. 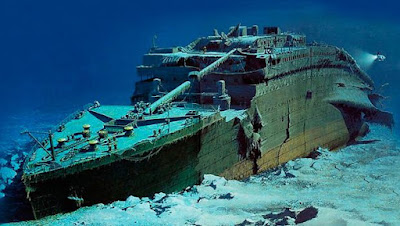 There are so many other childhood fears I could mention. The strange thing is that I remember most of them fondly...in retrospect, they were quite exciting and enjoyable. Perhaps the night reading David Copperfield and waiting for a nuclear attack was an exception.
Did my irrational fears end in my teens? Well, apart from phobias, they pretty much did. The last real irrational scare I experienced was when I went to see The Ring (the American remake) in 2002, in the Savoy cinema in Dublin's O'Connell Street. As most of my readers may know, this movie concerns an enigmatic video which, once it's viewed, causes the viewer to die within seven days. I remember walking out of the cinema thinking: "I wish I hadn't seen that", and lying awake that night in genuine fear.
But that was the last time my imagination terrified me. Ever since then, it's been prosaic fears!
Posted by Maolsheachlann at 3:27 AM