I just want to make a quick recommendation of the Michael Sugrue channel on YouTube. I've watched hours and hours of material on this channel already.
Michael Sugrue is a retired philosophy professor who recorded a series of lectures in the nineties, which have today become something of a YouTube sensation. The lectures are mostly philosophy but also include forays into literature, myth and religion. Sugrue is himself a Catholic. There are quite a few videos about the Bible. 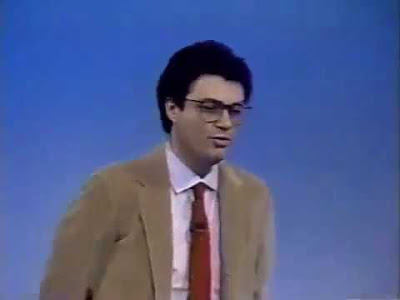 It's easy to see why they've become so popular. Sugrue is fluent (he rarely stumbles or hesitates and doesn't use notes), incisive, and funny.
Sadly, he is suffering from cancer today. Eleven years ago he was given five years to live. I wish him many more years, but it's wonderful that he lived to see his life's work become so popular.
Recently, to celebrate ten thousand subscribers, the channel posted some of Sugrue's own aphorisms, which included two corkers: "Always choose self-respect over self-pity" (a salutary reminder to me), and "He who kills time injures eternity."
Worth subscribing to!
Posted by Maolsheachlann at 3:18 AM