The Domesticity of the Dead 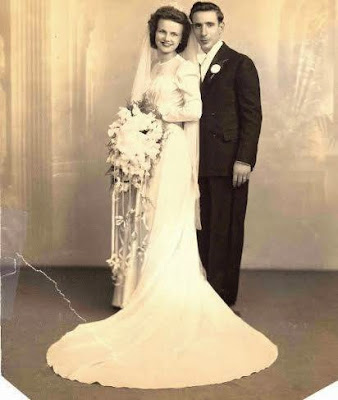 Recently, I learned that my wife is Irish.

Well, not completely Irish. But her researches into her ancestry have taught her that, despite her Sicilian maiden name, the blood that streams through her veins is predominately Irish.

I'm surprised how much this means to me. I always liked the fact that she comes from America, since I am an admirer of that great nation. (And I think there is something uniquely attractive about a woman who speaks with an American accent. It's so peppy.) But to learn that she does, after all, belong to the same people as me seems to add a whole new dimension to our relationship.

She's also come upon some old photographs of her family-- for instance, her grandmother and grandfather on their wedding day. Looking at the picture of the handsome couple, and remembering having stood by her grandmother's grave only this year, has only deepened a conviction that I've been feeling a lot lately-- that family folklore, family traditions and family memories are something precious beyond words.

What is depressing about a graveyard? Not so much the presence of death, I would venture, as the absence of memory. The names and dates upon the tombstones are so bald, when they can even be made out. They tell you so little about the people who lie beneath them. And how many of them are ever visited?

I think that the dead live on, not so much in tombstones and epitaphs, as in the stories and anecdotes and sayings that survive in the mouths of their children, grand-children and great-grandchildren. (Or those of their surviving relatives, if they didn't have children themselves.)

It seems strange to me that we tend to look only a couple of generations back. How many of us know anything about our great-great-grandparents? And yet we wouldn't exist without them. Their bodies and their efforts and their sacrifices gave us life. Our sense of affinity with our kindred is so intense, why should it evaporate at so few removes?

Another thing I find fascinating about family folklore is its evanescence. Most of the time it isn't written anywhere. It's not in any archive or library or chart. When it's gone, it's gone. And it belongs to nobody except its possessors; it's entirely in trust with them.

There is also something quite fascinating about the concept of a family-- I mean, an extended family. It may be ridiculous to think like this, but I find it interesting that there is no central bureau or authority for an extended family-- there is no headquarters for all the Millers in the world, or all the Donovans in the world, or all the Coopers in the world. We live in such a bureaucratic world that this actually seems odd to me. I take pleasure in thinking about it. Nobody owns a family name, and yet it's an affinity much more real than being a member of any corporation or club.

I could write so much more on this subject. I could write about my own family background, and my strong sense that my own life is only the latest chapter in a story which features so many other actors, so many other episodes, stretching back beyond the horizon of memory. But, for now, I'm savouring the fact that it turns out my wife was Irish before she even met me.
Posted by Maolsheachlann at 1:19 AM