The Kraken by Lord Alfred Tennyson

Memorising poetry has been a recurring theme in my life. At first, in my teens, I didn't have to memorise it. It just stuck in my memory. The first time I became aware of this phenomenon was when I was walking home from school, aged thirteen or fourteen, and realised I knew A Prayer for my Daughter by W.B. Yeats off by heart-- a poem of eighty lines. 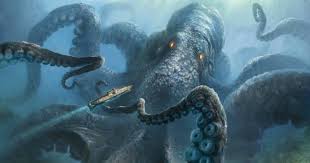 This ability to effortlessly memorise poetry was highly erratic-- it depended on the poem. In any case, it's long gone. At least since my twenties, I've had to make a deliberate effort, if I wanted to commit poetry to memory.

And I have done so, at different times. Every few years, I'm struck with a desire to memorize poetry, ballads, and sometimes other material. There's something very appealing in the idea of having culture in your head, carrying it about with you, having it as a part of you. Reading old books, I'm often put to shame by the familiarity of previous generations with the Bible, classics of English poetry, Shakespeare, and other cultural treasures-- not only knowing about them, but having selections from them on the tip of the tongue.

Once, some years ago, I recited "The Raven" by Edgar Allen Poe at a dinner party-- a poem of one hundred and eight lines. I got my hosts to lower the lights for the recitation, and held a single lighted candle in my hand. My plan was to blow it out before the last "Nevermore"-- unfortunately, I had some difficulty doing so, which rather ruined the effect.

The problem with memorising poetry is that, even when you've done so, it doesn't stay in your head unless you keep refreshing it. I couldn't recite "The Raven" now. So my most recent round of memorizing poetry includes a resolution to keep it fresh in my mind, by regularly reciting my repertoire (silently, for the most part). It gives me something to do in queues and at bus stops.

This rather long preamble serves to explain why I was memorizing "The Kraken" by Lord Alfred Tennyson today, despite the fact that I had memorised it before.

Come to think of it, though, I hadn't memorised it before. I'd tried to memorise it. I can remember the occasion quite vividly-- I was waiting to take the ferry to Wales, en route to England. I think I was twenty-seven. (This was the same trip on which I had the powerful experience of hearing ordinary people speak Welsh in the streets of Holyhead.) Perhaps the fact that I was making a sea crossing influenced the choice of poem. In any event, I remember struggling to learn it, despite the fact that it's only fifteen lines long. I must have forgotten about it when I got across the water.

The poem is one of Tennyson's earliest, published when he was twenty-one. It is on page six of my Collected Works. Here it is:

Below the thunders of the upper deep,
Far, far beneath in the abysmal sea,
His ancient, dreamless, uninvaded sleep
The Kraken sleepeth: faintest sunlights flee
About his shadowy sides; above him swell
Huge sponges of millennial growth and height;
And far away into the sickly light,
From many a wondrous grot and secret cell
Unnumbered and enormous polypi
Winnow with giant arms the slumbering green.
There hath he lain for ages, and will lie
Battening upon huge sea worms in his sleep,
Until the latter fire shall heat the deep;
Then once by man and angels to be seen,
In roaring he shall rise and on the surface die.

Memorizing the poem today, I found myself appreciating just how wonderful it is. (That's another virtue of learning poems off by heart.)

I don't know much about the legend of the Kraken. The internet tells me it's a sea monster reputed to lie off the coast of Norway and Greenland. My first encounter with the term "Kraken" was when I owned an Action Force figure of that name, as a child, though he looks more like a lizard-man than a sea monster. 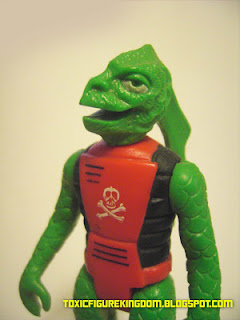 The first thing I like about this poem is its originality. There aren't very many poems about sea-monsters. Considering that a poem can take anything as its subject, it's a shame that poets generally confine themselves to such a narrow range of subjects. I grant that some subjects can never be played out, and will always be of overwhelming interest. But surely there should be room for more variety, even when due attention has been paid to the perennial themes.

Much of the pleasure of this poem comes from its simple descriptiveness, its picture painting. It's rare for me to enjoy this-- descriptive writing is generally the sort of writing I hate above all others. However, the description in this poem is not sustained long enough to become tedious, and is pleasingly vague.

The picture itself is an awe-inspiring one. Who doesn't enjoy imagining life in the ocean depths, a world completely alien to us? It's an once soothing and exciting. The superhero film Aquaman is top of the box office as I write, attesting to the enduring appeal of this idea.

Personally, I have always loved water. I don't mean drinking it, of course; I can't stand drinking it. I mean splashing about it in it, being immersed in it. I would love to be able to live underwater.

"The Kraken" is especially appealing in its picture-painting because it envisages "the abysmal sea" where only "faintest sunlight" reaches. (Tennyson's oceanography is inaccurate, but who cares?) Perhaps this poem appeals to me so much because I am fascinated by depths, both physical and figurative, and by hidden and secret places. "Abyss" and "abysmal" are among the most exciting words in the English language. "From many a wondrous grot and secret cell" is another line that excites this particular fascination.

In fact, this poem uses a lot of exciting words. Sometimes the appeal of a poem, or much of its appeal, lies in its use of evocative words. "The Sphinx" by Oscar Wilde might be the best example of this, but "The Kraken" is a good one. For instance, the line "Unnumbered and enormous polypi" gives me an intense pleasure, simply because it uses the rare and pleasing word "polypi"-- not often drawn on by poets. 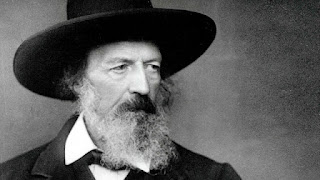 The line "Huge sponges of millennial growth and height" is another magnificently evocative line. I believe the genius of a poet can often be seen in the choice of a single word, and Tennyson's choice of millennial here is such an occasion. It's utterly inspired, and I find myself wondering how he thought of it.

"Ancient, dreamless, uninvaded sleep" is yet another line that pleases me vastly. I have written elsewhere on this blog about my fascination with sleep, though my fascination is with dreamful rather than dreamless sleep. The use of three adjectives in a row is powerful, adding a sense of grandeur and consequence.

The last line is very vivid, especially in its contrast with the rest of the poem, which has been full of references to silence and semi-darkness and sleep. "In roaring he shall rise and on the surface die."

The statement is intriguing and I've always found it rather sad. Why should the Kraken die on the surface? And why has he been sleeping so long? I'd assumed until now that this was a reference to either marine folklore or the Book of Revelation, but it doesn't seem to be. It seems to be Tennyson's own invention.

On the metaphoric level, it makes sense. Tennyson had a somewhat harsh view of nature, and saw it as something to be controlled and disciplined. His long poem cycle "Idylls of the King" opens with King Arthur taming a Britain which is seen as having degenerated into a wilderness: "The beast was more and more, and man was less and less". The vows his knights take involve a curbing of their natural instincts, and as Camelot itself falls apart, several characters suggest Arthur's demands of his knights are actually unnatural. In another poem, Tennyson famously celebrates the three virtues of "self-reverence, self-knowledge, self-control".

How typically Victorian, this concern with repression! However, perhaps the Victorians were not so far wrong. Indeed, progressives now seem to have become quite keen on repression, especially when it comes to expressions of male sexuality. Repression seems to be a concept we can't get away from, and its permanent relevance to human life might be part of what gives "The Kraken" its power. But I must admit I enjoy it more for its literal sense than for any psychological undertones which might be present in it.
Posted by Maolsheachlann at 4:03 PM