Thoughts on Lord of the Rings

I'm re-reading Lord of the Rings and I've been posting miscellaneous thoughts about it on Facebook. I thought some of my blog readers might possibly be interested in them. (They are in reverse chronological order as I posted them.)

Despite the single disparaging reference here, I do actually like Peter Jackson's Lord of the Rings movies. To bring the books to the movie screen was a monumental achievement in itself, and there were far more good things about the movies than bad things. However, it has had the lamentable effect that I can now only imagine the characters as they were cast and portrayed in the movies. Before now, my imagination was more likely to draw on the paintings in The Tolkien Calendar, which was an annual gift from my elder sister back in the eighties. Admittedly many of the artists who contributed to the calendar worked as consultants on the movies, so there is a continuity. But a movie has a far more tyrannical grip on the imagination than a series of paintings by different artists. 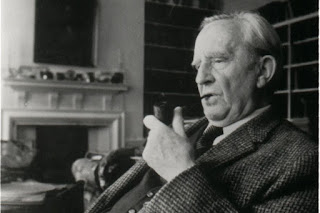 1. Of course, The Lord of the Rings grew out of Tolkien's interest in languages. All of his writings did. He invented fantasy languages as a private hobby and his fictional worlds were invented to give those languages a context.

Which gave me this idea today: an interesting cultural history could be written on the place of other languages in English life, through the centuries. There was a time when educated English people were simply expected to know Latin, Greek and French. At least, quotations in those tongues are often untranslated in old English books, to the nineteenth century and beyond. Is England and Britain more monolingual today than ever before, aside from immigrants (who are unlikely to pass their languages onto their hosts, and who generally lose them in a generation or two)? The question obviously has relevance for Ireland, too. The Irish language is the national exercise bike in the attic. The British were instrumental in almost killing it, but we can't blame them for us not reviving it since independence. 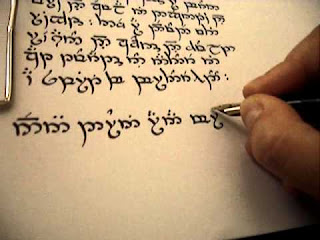 2. I am reading Return of the King now. I accidentally turned two pages instead of one and found myself confused by the discontinuity, before I realized my mistake. But it reminded me of something I used to do as a child. I used to take a random book from the shelf (one I hadn't read), open it on a random page, and feel a frisson of wonder and mystery at the fact that a story (or a discussion) was going on at that point, one that I had arrived upon in media res. One that was always going on, on the shelf, even with nobody reading it.

I have this feeling about so many things, especially walking into a place I've never been before-- a café, a house, an alley, anywhere. That place had its own existence before I ever knew about it. The solipsist in me has a sneaking suspicion that places only flicker into existence when I walk into them. But I am grateful for that, because it allows the shocked wonder of realising the opposite-- a wonder Chesterton loved to dwell on.

I feel this about people too. Sometimes I am struck by looking at someone in the street and realising that person is an entire world unto themselves.

I think this theme is quite appropriate to Lord of the Rings because so much of Tolkien's artistry is creating fictional places that do have this solidity, this sense of being real places which are not just stage scenery-- even the least important places in the story, even the wilderness.

3. Lord of the Rings spoiler alert...

I've just been reading the passage in The Two Towers where the "reborn" Gandalf reveals himself to Gimli, Aragorn and Legolas. I never noticed it before but there seem to be strong parallels with the Emmaus road resurrection appearance. The three are on a journey; they don't recognize Gandalf at first; Gandalf asks them what they are doing; then he tells them. Also, the sudden change from despair to jubilation. I wonder if that is all accidental or intended? Aragorn even says: "Beyond all hope you return to us in our need. What veil was over my sight?".

4. One thing that is interesting about C.S. Lewis and J.R.R. Tolkien is that they had both experienced war, possibly the worst war in all history. But their fantasy writings convey the romance as well as the horror of war. Indeed, C.S. Lewis in some essay (I forget which) complains that pacifism had made many of his war acquaintances put on an excessively funereal manner and repress their natural animal spirits.

Don't get me wrong. I'm very, very grateful I've never had to go to war and I would probably pee myself at the sound of enemy gunfire. But it's interesting that not everyone (by a long chalk) who survived the Great War came out a pacifist, or inoculated against any idea of romance in battle. Of course both men were very happy to be invalided out... 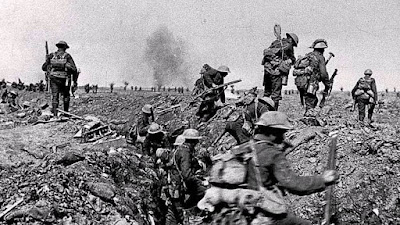 4. As I said before, although I was too young to really absorb Lord of the Rings when I first read it, and in later childhood I only had access to the first volume, it had a huge effect on my imagination. I think it is part of the reason I am such an instinctive nationalist. Almost all of the characters in the book are devoted to the idea of homeland, people, traditions, customs, belonging. They have their own songs and skills and way of life. This has always seemed like the ideal to me. Yes, the book also has themes of the different races overcoming suspicion and enmity, and working together, but the emphasis is on the distinctiveness.

5. One thing I've always thought a bit silly in Fellowship of the Ring is the claim that Frodo's mithril shirt is "worth all of the Shire and everything in it". Surely not. Even if mithril was ten times more precious than gold, as stated, surely it's impossible for a piece of armour (however precious) to be worth more than a whole territory. All the farms, buildings, animals, etc. etc.

6. One of the worst things about Peter Jackson's trilogy was the portrayal of Merry and Pippin. In the books they speak like Oxbridge undergrads. In the films they speak like they have wandered out of a snooker hall.

7. I'm embarking on reading Lord of the Rings again. It's a book that has had a big influence on my life although in a somewhat strange way. It had a huge prestige in my family when I was growing up, among my brothers and sisters, and indeed uncles and cousins. I read it all the way through when I was seven years old, although it was rather over my head at that age, and I only took in a vague impression.

In later childhood, the only volume I had access to was The Fellowship of the Ring, which I read over and over. So I'm in the rather strange position of being very familiar with the first volume, but much less familiar with the later ones-- even though I've read the whole thing a couple of times in adulthood. (I was too timid to join a library until I was fifteen years old.)

Reading the prologue I notice that Bilbo returned to the Shire from his adventures in The Hobbit on June 22, my wedding anniversary.

Posted by Maolsheachlann at 10:56 AM