A New Catholic Magazine, and Other Matters

A new online Catholic magazine was launched on the first day of this month. It's called Leaven, and this is how it describes itself:
Leaven is a bimonthly digital magazine mainly for and by young Catholics in Ireland, providing readers with thought-provoking material from a range of voices, talking about everything, and holding to what is true. Bringing a spiritual lens to the world, we aim to showcase a coherently and distinctly Irish Catholic vision that is kind and thoughtful, honest and faithful, balanced, relevant, and fresh. We are firmly committed to getting beyond stereotypes and stale talking points, highlighting that smart, young, curious, compassionate people – and especially women! – are integral to our Church, and helping their voices be heard. Leaven is for anyone who wants to grow a genuine living faith in their own life and become a leaven for Ireland and the world. 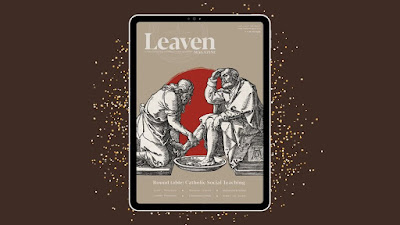 Each issue will explore a mix of topics from science to literature, pop culture to social justice, history to philosophy and beyond. The first issue will be launching on Holy Thursday, 1 April, under the editorship of Greg Daly, formerly of The Irish Catholic, Aleteia, and Catholic Voices.
I have an article in the first issue, in which I write about my fears and sadness regarding the decline of oral culture (stories, songs, riddles, and so forth). It has the title Parlour Games in the Jury Room, which I only mention because I take a strange relish in the title itself. In all honesty, there's nothing in the article that regular readers of this blog won't have encountered many times already, so I wouldn't recommend you pay to read it. But you might want to subscribe to Leaven anyway. It's a worthwhile venture, insofar as it aims to present Catholic writing on a wide variety of topics, in the spirit of C.S. Lewis's observation: "What we want is not more little books about Christianity, but more little books by Christians on other subjects—with their Christianity latent."
Here is the link.
I greatly applaud Greg Daly on this venture. And I also envy him. Lately, I've felt the strong urge to do something of this kind myself-- to launch a magazine or a blog or a group which will play some part, however small, in the cultural life of our time.
Partly this is because I would like to emulate my father, who edited (and mostly wrote) the community magazine The Ballymun News for about thirty years. (Here is a link about the magazine from the socialist blog The Cedar House Revolution-- the author's guesses about the magazine are off the mark, but my brother Turlough Kelly puts him right in the comment section.) 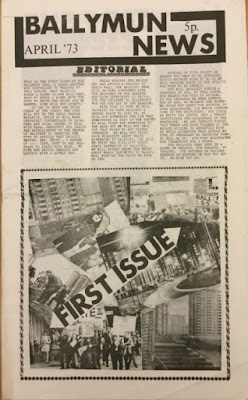 The more I think of it, the more impressed I am by my father's determination and drive in publishing a magazine. I'm impressed that he wrote so much of it, of course, but I'm even more impressed that he managed to navigate the practicalities of printing, typesetting, attracting advertising, and all that kind of thing. (When I was growing up, there was a book on our bookshelves called Into Print, a "how-to" book for putting out your own publication, which I loved for its photographs and their deliciously seventies atmosphere-- long hair, wide shirt-collars, grainy photography, that kind of thing.)
As I've mentioned in previous blog posts, I've felt drawn more and more to poetry, to try to perform some service to poetry and its presence in everyday life. I don't know how to do that. I have thought about starting a poetry discussion group in work. I've even thought of forming something called The Poetry Liberation Front and handing out poems to shoppers outside supermarkets. (I've been increasingly preoccupied with supermarkets, too, which seem to me like the Ground Zero of modern soullessness and utilitarianism. Just ignoring them doesn't seem to be an adequate reponse to their existence.)
But I've also been contemplating starting a school of poets, or some kind of poetry journal. I love reading about the different schools of poetry that run through literary history-- the Graveyard Poets, the Pylon Poets, the Fireside Poets, the Movement, and so on. True, most poets (like most artists of any kind) have an individualist temperament which makes them kick against any classification, but I still like the idea of poetry schools. 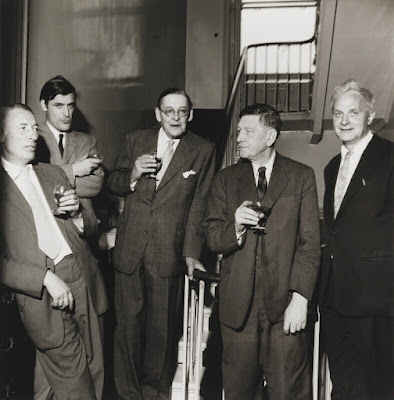 When I was a teenager, and into my early twenties, I wanted to be A Poet above all else. Years of disillusionment proved to me how thankless a task this was. Nobody publishes poetry anymore. Nobody reads it. And certainly nobody pays for it. These obstacles are compounded if you write traditionalist verse-- verse that rhymes, scans, and makes some kind of sense even on a first reading. Free verse rules the roost now.
I took to writing prose in my late twenties, and quickly realized that prose gets a much readier audience. And, once people get used to reading your prose, some of them will even read some of your poems. But I'd pretty much abandoned the idea of poetry as anything but a sideline, and even convinced myself that I'd outgrown such adolescent ambitions. After all, most writers start out writing poetry.
However, the stubborn and idealistic and contrarian side of my nature is making itself heard more and more. After all, it's not OK that poetry is relegated to a literary ghetto today-- occasionally to be heard at ceremonial occasions, or used as a form of therapy. (Not that I'm against either of those uses.) And it seems a cop-out just to accept prose writing as the line of least resistance. Poetry needs to be made a part of ordinary life again-- if there is no audience right now, then creating an audience is the necessary first step. To fail at that enterprise would be a noble failure. Once again, I aspire to be A Poet, and not just a prose writer who occasionally writes poems.
I write this on Easter Saturday. I've lamented, in a previous post, the lack of "thickness" that Easter suffers from. Why are there no popular Easter songs, no films set at Easter other than Christian films? At least there was no shortage of worshippers doing the Stations of the Cross and attending confession in my local church yesterday. This might be a project for all of us-- to make Easter great again, or perhaps (in purely cultural terms) for the first time!
In the meantime, I wish you a happy and holy Eastertide.
Posted by Maolsheachlann at 6:03 AM