The Faith of Michael Collins

Yesterday marked the ninety-ninth anniversary of the assasination of Michael Collins, at the poignantly named Béal-na-Bláth. Although I'm not regularly tuned to the Irish airwaves, I get the impression that there was little mention of this anniversary on them. (I do check the RTE website for news most days, so that gives me some notion of what is being discussed.) The centenary of the War of Independence has barely been mentioned in Irish the media, as far as I can tell, which have been focused obsessively on the Covid epidemic. One wonders what our ancestors, who braved the Black and Tans and Auxillaries, would have made of the lockdowns. 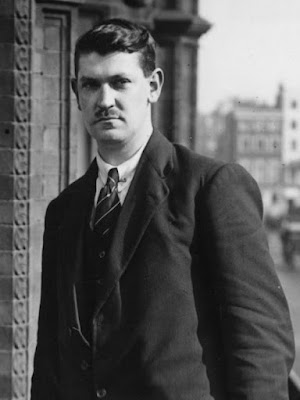 I don't necessarily believe the War of Independence was justified, especially given the guerilla tactics used, but it certainly deserves to be commemorated.

I found myself wondering about Collins's religious beliefs today. I was familiar with the stories that he had mocked fellow insurgents in Easter Week for their anxiety to go to Confession. The popular perception seems to be that Collins was the lost modernizer, while De Valera was the theocrat who prevailed. Only the good die young, and all that.

This essay by Mary Kenny suggests that Collins became a daily Mass-goer during the Treaty negotations, and remained comparatively pious for the rest of his short life. (It's a PDF file which is free to download.)

Did Michael Collins really find time, as he lay dying of a head wound, to say: "No reprisals, lads?". That sounds like something of a pious legend to me.

In a way, it's easy to understand why so little attention has been paid to the various anniversaries which have come along recently, a hundred years after the founding of the state. The Ireland of today bears so little resemblance to the ideals of the revolutionaries that it's hard even to relate the two.

Of course, achievements nearly always fall short of ideals, and it's true that there were many different visions for Ireland's future among those involved in the struggle for Irish independence. But they nearly all shared an aspiration that an independent Ireland would develop according to its native genius, which was seen as distinctively spiritual and anti-materialistic. This aspiration is clearly articulated, for instance, in The Path to Freedom by Michael Collins. We need hardly say that this ideal has been disappointed so far.

Posted by Maolsheachlann at 7:10 AM