Peter Hitchens has written a very interesting and entertaining essay on pubs and other drinking dens, in The Lamp. Read it here. (Hitchens is at his best in this sort of retrospective, reflective essay-- I don't think it could be called nostalgic, though it's tinged with nostalgia.)

It got me thinking about pubs, a subject that has been of life-long interest to me.

The Irish have a tendency to alcoholism, which seems to be rooted in our genes. (Here's a link on the subject; I only glanced at it, and don't vouch for its accuracy.) I've witnessed the damage that alcoholism can wreak on a human life and I would never speak lightly of it. However, I'm not really going to address that subject here. I personally think it's too much of a reaction to reject alcohol and pub culture in its entirety. 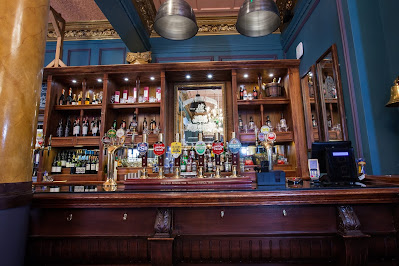 (Brendan Behan said that "an Irish queer is a fellow who prefers women to drink".)

I drink very little myself. Maybe a couple of drinks a month, more at Christmas. I didn't drink at all until I was twenty-seven, out of a combination of contrarianism and fear of killing brain cells (though I see this latter, in itself, is a myth). Eventually, I decided that there were enough examples of great writers and intellectuals who had been perpetually soaked to show that drinking didn't necessarily reduce your brain-power. So eventually I allowed a friend to buy me a Stella Artois in TP Smith's in Jervis Street. I didn't like it much, and in fact I've never developed a taste for beer, lager or stout (yes, including Guinness.)

For some reason-- I don't quite understand why-- my taste for brandy became something that everybody associates with me. A sort of trademark. People still say to me: "We must meet up and I'll buy you a brandy", etc. I protest that I never actually drank all that much of the stuff. One evening I drank five in a row, but that was too see how many it would take to get me tipsy. (It was enough.)

"He who aspires to be a hero must drink brandy", said Samuel Johnson. My father claimed that Irish emigrants to France invented brandy, but I can't verify that.

Less famously, I developed a taste for Bailey's Irish cream-- a drink whose invention is a very interesting story of its own.

(In the case of both brandy and Irish cream, I'm just as happy with a cheap knock-off as I am with Hennessy's or Bailey's.) 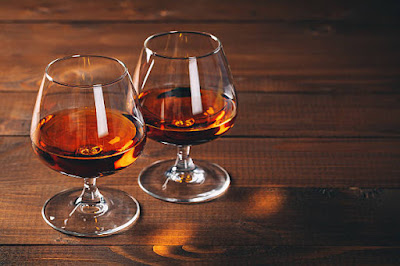 Most recently, I've begun to drink cider-- Orchard Thieves, preferably. The problem with brandy and Bailey's is that they go very quickly, while you can nurse a pint of cider.

There were two pubs in Ballymun, where I grew up, at opposite ends of the shopping centre. One was called The Towers and the other was called The Penthouse. I was never in either of them very much, but I heard about them a lot, mostly from my father.

I suppose my imagination was spurred by my father's stories. By his account, pubs were places full of political and social debate, as well as occasional high jinks. This accorded with the atmosphere of Ballymun at that time, or at least my (mostly vicarious) experience of it. Everybody seemed to be a socialist, a communist, an Irish language enthusiast, an anarchist, an Irish republican, or some kind of radical. Ideas were in the air.

This has ever after been my ideal of a pub: a place where people drink and discuss ideas, or at least have serious and cultured conversation. Sadly, I've been very disillusioned in this. 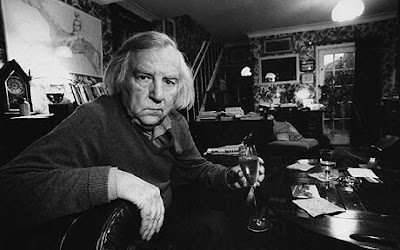 Another influence on my ideal of the pub was Keith Waterhouse, an English writer who I came to admire in my youth through the presence of two of his books in our home: Mondays, Thursdays and Billy Liar. Waterhouse made frequent reference to pubs in his writing, which solidified my perception of the pub as a place where writers and thinkers and people of culture were to be found.

When I grew older and became a fan of G.K. Chesterton, I encountered another fan of the public house. He wrote one decent poem with the refrain "Will someone take me to the pub?", and one of his most moving sentences comes in an appreciation of The Pickwick Papers: "The inn does not point to the road; the road points to the inn. And all roads point at last to an ultimate inn, where we shall meet Dickens and all his characters; and when we drink again it shall be from the great flagons in the tavern at the end of the world." Chesterton put his money where his mouth was, obviously, and spent a great deal of his time in pubs.

As I've said, however, my perception of the pub as  a hotbed of serious, intellectual, literary conversation was to be rudely shattered when I actually ventured into some.

I've had some happy times and good conversations in pubs. Generally with small groups, or with a single friend. But my experience is that, once a group goes beyond three or four people (at most), the conversation descends into banter and lowest-common-denominator chatter.

And, as the night wears on, obviously, everybody grows drunker, the music gets louder, and the conversation grows more banal and aimless. This is a fairly frequent experience I've had in pubs; wanting to leave, but being unable to do so out of politeness, and thinking to myself: "When on earth is this going to come to an end?".

Anthony Cronin, in his fascinating book Dead as Doornails (which I've read three or four times at this stage), declares that the Dublin pub is the worst possible place for discussing literature, or anything else. The book (a description of Dublin literary figures in the middle of the twentieth century) is mostly set in the literary pubs of Dublin. Cronin's portrayal of this environment, however, is far from glamorous: everybody seems miserable, frustrated, resentful, and dispirited. The atmosphere he evokes, however, is a curiously appealing one-- to me, anyway. 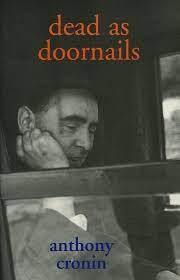 Irish pubs are generally divided into "old man pubs", which are usually uncomfortable and rickety, and the more genteel modern pubs-- gastropubs, themed pubs, bright and hygienic and spacious pubs. Few people will express a preference for the latter.

I like both of them, although I rather prefer the modern comfortable ones. I do, however, appreciate the sense of tradition in the "old man" pubs-- the nooks, the old photographs of agricultural fairs and old GAA matches, all that kind of thing. I'm less keen on the filthy bathrooms with no soap and the lack of upholstery.

To come to specific pubs, my favourite is probably Nealon's in Capel Street. This is definitely an "old man" pub, with plasterwork on the ceiling, an enormous mirror with a huge brass frame over the fireplace, and the aforementioned sepia framed photographs. (One shows Michael Collins and De Valera attending a GAA final, I seem to remember.) It's a small pub, and if you sit downstairs, you can watch the comings and goings on Capel Street, a narrow and ramshackle street.

The Tolka House in Glasnevin is rather the opposite-- a clean and spacious suburban pub, with the smell of gravy drifting from the carvery, a pleasantly assymetrical and bewildering interior, and a curlicue-heavy pub mirror hanging over the fireplace.

Here is Peter Hitchens's view on our taste in pubs:

Most bars are horrible in various ways. Yet those of us (predominantly men) who even slightly like to drink all have ideas in our heads about what bars should be like. The marketing men are well aware of it. They know that we generally appreciate dark, polished wood, engraved glass or mirrors, a brass rail and lights that are not too bright, and in winter a real fire.
Well, I don't think I could beat that as a summary. The only difficult thing is finding conversation to live up to the setting. Although perhaps the silent conversation of a book is the easiest (and probably the best) way to do this.
Posted by Maolsheachlann at 7:10 AM