The Fountain in the Omni Centre, Santry 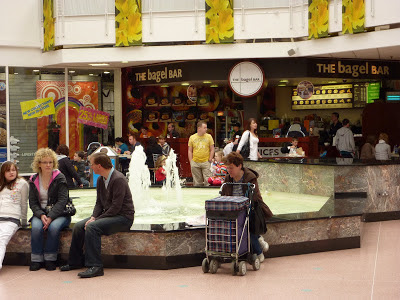 If you ever find yourself in Santry's Omni shopping centre, be sure to sit down in either the Bagel Bar or the O'Brien's café, both of which overlook the fountain in the centre. Buy a hot chocolate (with marshmallows). If you are feeling hungry you can even buy a West Coast bagel in the Bagel Bar-- a delicious marriage of smoked salmon and cream cheese. And sit there and stare into the foaming waters.

I do it all the time. It is one of my very favourite things in the world to do. It rejuvenates me.

I have been a habitué of the Omni shopping centre for years now. I started going to its Omniplex cinema in 2001, and since then I have seen 277 films there. (That doesn't include repeat viewings of the same film. And I know because I keep a nerdy spreadsheet of all the films I go to see.)

The Omniplex is my favourite cinema in the world-- the cinema, for me-- but the Omni centre has charms of its own. Of course, it is bathed in the associations of all the films I've seen in the adjoining cinema, but there's more to it than that. I like its bright colours. I like its human scale-- there are no warehouse-like shops in it. Its music and DVD shop (Golden Discs, an Irish franchise) is so pleasantly pokey that I usually know pretty much every film that's on sale there.

The mixture of shops is a charming mix of the household (Tesco, a newsagent, a butcher's) and the mildly luxurious (cheap jewellery shops, an art and hobby shop, a beauty salon). The shoppers are generally scrubbed, well-turned out, but at their ease. They don't have either the consumerist glassy-eyed stare of the hordes in Dundrum Shopping Centre or the unshaven, worn-down look of grocery shoppers in your local corner shop. I always get the impression that a visit to the Omni centre is neither drudgery nor a big day out, and that middle-ground of human experience appeals to me vastly.

I had been going to the Omni Centre for years before I became fascinated-- really fascinated-- by the fountain at its centre.

It was when I was going through my "spiritual crisis", around the year 2009. A lifetime of not being too pushed about religion had suddenly been replaced by a conviction that it was the only really important thing in life. Nonetheless, I was still mired in my agnosticism-cum-atheism, so I was going through a lot of mental anguish.

I had downloaded an audio version of the King James Bible onto my MP3 player and I liked to listen to it on my rambles. This was for comfort more than anything else; I found the very words and tone immensely consoling. It was narrated by a fellow called Eric Martin, whose sounds like he is about 500 years old and who declaims the words as though from the top of Mount Zion. There is no nonsense about a conversational tone with Eric Martin. He recites the words of Scripture, in a high and slow and magisterial tone, and in the accent of a nineteenth century British Prime Minister. Even to call it BBC English is an understatement. It's...well, it's Biblical English.

Of course, this kind of grandfatherly sternness was exactly what I needed at the time. It was hard, listening to Eric Martin, to believe that the words he was reciting had been dreamed up by Bronze Age goat herders (as anti-Chrisians love to put it). It was much more like listening to the voice of God Himself.

(I'm not surprised Mr. Martin doesn't ponce around with a nuanced recitation. This is what I found about him on the internet: "Award-winning narrator Eric Martin has worked on the missions field fighting for persecuted Christians and helping evacuate Jews from Russia." How could a fellow like that be anything but stentorian?)

Even the quirks of the recording added to this impression. Though Eric Martin recites in a booming voice, it sounds like this voice is coming from an immense distance, almost from the depths of space. The crackle that underlies his words makes it seem more evocative. (Have you ever noticed that smokey, sepia photographs seem more "spiritual" than modern photographs?) And there is some kind of feedback or echo in the background, too-- it sounds like a murmur of faint voices. Somehow that adds to the sense of grandeur, the sense that this is a story on a grand scale-- indeed, on a cosmic scale.

At a time when I felt lonelier and more abandoned than I had ever felt in my life, Eric Martin and the ghostly voices behind him made me feel less lonely. I didn't even listen to the words a lot of the time-- I just liked having them in my ear.

But what about the fountain?

Well, I was wondering through the Omni, listening to the Acts of the Apostles, and savouring the great sense of excitement and consequence in the book. (It was plain as a pikestaff to me, at this stage, that if atheism was true then nothing mattered, nothing had consequence. No matter what passions were aroused or what legacy was created-- even a legacy of thousands of years-- eventually it came to naught.)

I found myself looking into the fountain and all of a sudden, I saw the principle of life-- the Burning Bush, the Pillar of Fire, the Alpha and the Omega, I AM THAT I AM, the spring of water welling up eternally. I saw a symbol of That which would never fail, never run out, never falter.

I can imagine some sceptic reading this and snorting, "What rubbish! Of course the fountain will stop running, eventually. I'm sure it stops running every night." Well, of course I know that. The fountain was a symbol, nothing more. But who can describe the power of a symbol?

Since then, I have been hypnotized by the fountain. I sip my hot chocolate and stare into it for minutes on end. It has become a symbol, not only of the divine, but of the life that goes on all around it-- the life of children playing, mothers pushing buggies, teenagers talking about soccer, young women talking about the reality TV show on the night before. All that human life that is so banal, so little, so petty, and so infinitely precious.

Once I tried to tell a friend about my fountain, and she said: "You should go to Powerscourt. There's a fantastic fountain there." I felt frustrated. I don't care if there are fountains that send jets hundreds of feet in the air, that have coloured lights displays making them shimmer all the way through the spectrum, that are hundreds of years old, or that spout their waters through the jaws of magnificently-sculpted gargoyles. This is my fountain. It is unlike any other fountain in the world, and if it was any bigger or any more opulent I wouldn't like it as much as I do.

For one thing, I love the colour. It's a gorgeous turquoise, the kind of colour toothpaste manufacturers use when they want to signal freshness and mintiness. Water that colour always makes me want to jump in. (I often imagine doing this, and how it would shock the bystanders.)

I like that there are pennies at the bottom of the fountain. This seems to me like one of the most charming and picturesque customs in the whole world. A penny (or a cent, as I suppose I should say now) is a symbol of all the little, humble joys of life; cups of tea, jokes, snowfall.

I like that people sit around the edge of the fountain. It makes it seem even more a symbol of life.

I like that the fountain is decorated for the seasons. At Halloween and St. Patrick's Day and Valentine's Day and Christmas, different figures and decorations hang from the ceiling far above it. Anything that makes us look up inspires a feeling of awe, even if it is a gentle feeling of awe. One Christmas they had a mechanical Santa who endlessly climbed up and down a cable. I got a shock when I saw him, thinking it was a real person.

Sometimes the fountain is switched off. I remember one day I rang the Bagel Bar to ask if the fountain was on, since it didn't seem worth while to go to the Omni if it wasn't. The girl who answered told me that it was, and then asked-- and I don't blame her for being confused-- "Who is this?". "I'm nobody", I said and hung up.

It's my fountain. It may not quite be the Burning Bush, but it's the closest I'm ever going to get. Long may it jet and foam and bubble and spurt.

(Post Script: I got a shock today when I actually visited my fountain-- which I described so confidently above-- and realised that its waters are not "a gorgeous turquoise, the kind of colour toothpaste manufacturers use when they want to signal freshness and mintiness". They are, in fact, perfectly transparent, and take on the colour of the basin beneath them, which is the colour of black marble. I must have stared into that fountain fifty times in the last few years, if not many more. I knew my powers of observation were bad, but I didn't know they were that bad.)
Posted by Maolsheachlann at 12:14 PM