My Latest Article in Ireland's Own

My latest article in Ireland's Own is "The Magic of Writing", and is (I hope) a breezy piece on the creative processes and working habits of writers. It's a subject that fascinates me. It appears in the May Annual, pictured here. 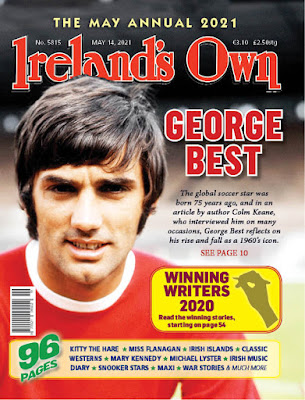 I've had quite a few articles published in Ireland's Own now. My first was about newspaper letter pages (incidentally, the subject on which I wrote my college dissertation), and appeared in March 2017. Since then I've had articles on a wide variety of subjects published in it: "Slogans in Irish Life", "The Weird and Wonderful World of Sports", a look back at the Dublin Millennium of 1988, a piece on streets named after Irish people all over the world, a Christmas piece on the ghost stories of M.R. James (traditionally told and broadcast at Christmas), and a few others.

I even had a fifteen-part series on Irish lighthouses! Boy, did that take a lot of research...

I'm proud to have my articles appear in Ireland's Own. It's almost the only "family" magazine widely sold in Ireland. It's also one of very the few general interest magazines available here. The magazine shelves in Ireland (as elsewhere, I fear) are dominated by glossy women's magazines, car magazines, TV soap magazines, and other magazines which could be best described as "consumer culture and lifestyle". 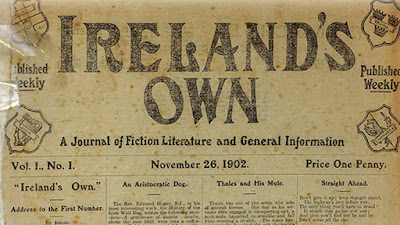 Ireland's Own is also a legacy of the Irish Revival, first appearing in 1902. I've heard it described as the only survivor of a raft of similar publications which first appeared at that time.

I have happy childhood memories of reading Ireland's Own. My aunt Kitty, who lived on a farm in Limerick, had stacks of past issues. I particularly enjoyed the ghost stories. The long-running column "Stranger Than Fiction", which chronicled stories of the uncanny, gave me many pleasant chills. It's still running today!

My aunt Kitty died in 2007, but her husband is still alive. I actually only learned this very recently, and I spoke to him (on the phone) a few days ago, for the first time since my wedding in 2013. He's just turned eighty-nine. When I was a kid, summer holidays were spent on his farm in Limerick. It was a huge contrast to Ballymun and made a big impression on me. It seemed quite obvious to me that rural life and rural ways were healthier than those of the housing estate where I lived. 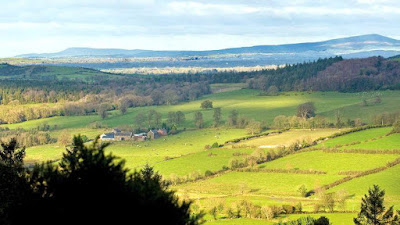 It even led me to a (brief) religious conversion at the age of fourteen. Mass attendance was already dropping in Dublin at this time, so it was a new and arrresting experience to see a whole village attend Mass together. The gospel text that sparked my imagination was "I am the vine, you are the branches"...which, coincidentally, is also today's gospel text. My newfound piety didn't last long on my return to Dublin, however.

When I went to my aunt's funeral in 2007, I was becoming increasingly conservative and traditional. I'd always been something of a cultural conservative, especially when it came to poetry and visual art. But, by this time, I was moving more towards social conservatism, as well. I remember standing in the church at my aunt's funeral-- the same church where I'd had my fleeting conversion-- and feeling a powerful inner conflict. I could see clearly by now that the Catholic Church was the protector of so much that I found precious, but I couldn't simply believe on this account. It took a lot of thinking and reading and (I might even say) agonizing to take that final step.

Recently, as I mentioned a few weeks ago, an elderly gentleman who I knew somewhat passed away. I had been meaning to get back in touch with him for many months. When I finally emailed him, and got no reply, I discovered I'd been too late by a matter of weeks. This motivated me to get in touch with my uncle, and I was overjoyed that the case was different this time. Deo gratias!

Posted by Maolsheachlann at 4:40 AM