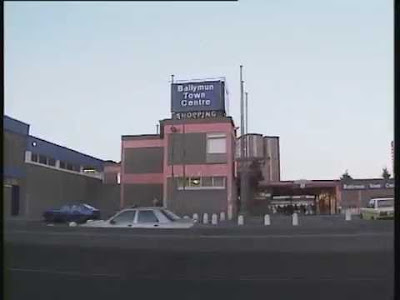 (I've struggled to find photographs of the shopping centre before its decline. It was in decline and, eventually, closed for many years before it was demolished. Most of the pictures I've used are from well past its prime.)
Ballymun shopping centre was built like a cross, with four "malls" extending from a central square. The central square was uncovered, but the malls were roofed with translucent, perpetually grimy canopies. In the centre of the shopping centre was the supermarket, which changed its name from Quinnsworth to Crazy Prices to Tesco in the years of my awareness.

If the shopping centre was the heart of the universe as I perceived it, the supermarket was the core of that heart. Although I've come to detest supermarkets with my whole soul, this supermarket was a place of wonder to me all those years ago. The bright fluorescent lights, which now seem so depressing to me, were quite the opposite then; cheerful, welcoming, futuristic. Everything was clean and bright and new. It seemed like a bastion of permanence to me, even a beacon of eternity. Knowing that it's completely gone now-- not just that the lights are off, not just that the doors are closed, but that even the shell of the building no longer exists-- leaves me with a very strange feeling, almost a feeling of amputation.

A few particular things stand out when I remember the supermarket. One was the big boxes of chocolates that stood high up on the sweet shelves when I was a small kid. They had "arty" pictures on the boxes-- meadows, and dogs, and that kind of thing. They seemed like the pinnacle of unattainable luxury.
Then there was "Extension Seventeen". Every now and again, an announcement would come over the intercom calling some member of staff to extension seventeen. I got it into my head that it referred to a space that lay behind a curtain of translucent plastic strips, a dark space with a glimmer of daylight at the far end. Staff would pass through the plastic curtain and momentarily reveal a view of boxes and trolleys. To me it was a place of mystery, and I was tantalized by the contrast between the dark, functional Extension Seventeen and the rest of the supermarket. It was like a portal to another world. 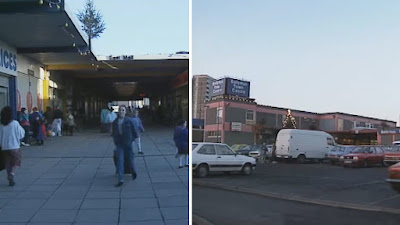 Another memory of the supermarket are the various "big ticket" items-- bicycles and Wendy houses, for instance-- that hung from the ceiling. As I write those words, I wonder if I'm right and if they really did hang from the ceiling. But I think they did.  Why would I remember it this way, otherwise?Then there were the stalls that offered free samples of various products, such as sausages or dairy spread. These were a novelty to me when they first appeared, were a constant for a while, and then more or less disappeared. It was a common joke that you could have your breakfast in the supermarket at this time.

There were three newsagents in Ballymun shopping centre; Miss Mary's, Jon's, and Joe Wynnes. Each one was situated in a different mall, and in my mind they formed a clear hierarchy. Miss Mary's was the top of the tree. Not only did it have a classy name and sign (which mimicked handwriting on ruled notepad), but it had by far the best selection of magazines, newspapers, and stationery. It was in Miss Mary's that I bought my comics every Thursday (Battle, the Eagle, Transformers, and-- later on, after Italia '90 roused my interest in soccer-- Roy of the Rovers and Shoot!). Thursday was the highlight of the week. I would read them as I walked around the supermarket with my mother. Miss Mary's also had an impressive selection of toys, including model airplanes which it often displayed in the window. 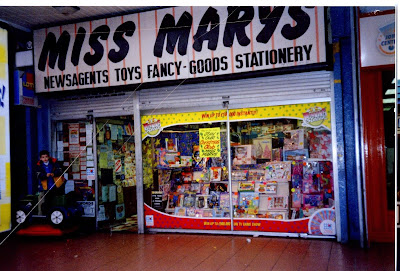 Jon's came second in the pecking order. It had a fair selection of magazines, but its toys tended to be cheap. They were all behind glass panes opposite the cash registers. It had a Canada Dry sign which seemed very exotic to me, since I was unfamiliar with the drink, and the logo and its lettering was tasteful. 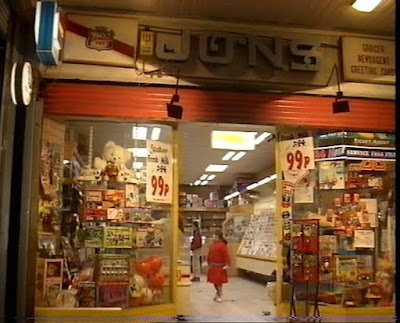 Joe Wynne's was the bottom of the pile. I still have dreams in which I walk into Joe Wynne's and the shelves are dusty and almost empty. I'm sure my subconscious is exaggerating there, but the place always had a forlorn and melancholy air about it, at least to me. The fact that it was beside an off-license, pub and betting shop made it seem somewhat seedy. And is it my memory playing tricks, or was there only ever one person working in Joe Wynne's at a time? The other newsagents always seemed to have more staff behind the counter, giving them more of a sense of life.

One somewhat strange feature of Ballymun Shopping Centre was the small department store Perry's. Although it was a department store, it wasn't part of a chain that I'm aware of. It had a toy section, a large clothing section, a sweet counter, and I think it sold wallpapers and home furnishings as well. At Christmas time, it had printed posters with the slogan "Have a Merry Perry Christmas". There was a mechanical parrot which dispensed toys in plastic eggs if you put coins in its slot. I still remember what it would say: "I love the sound of money. Here comes your present. Mind how you go." I don't remember when Perry's closed; it was long before the shopping centre itself closed. Perry's always seemed like a strange place to me, because it didn't really fit into any category. It seemed too small to be a department store, but it was hard to describe it as anything else. And all the different departments seemed surprisingly self-contained. If it's not a trick of memory, even the floor seemed to have different levels.

Of course, many different shops opened and closed down through the years. Here are a few that come to mind:

The fish shop, which had a cartoon picture of a fish with legs hanging outside. Although it was called the fish shop, it sold vegetables and other meats as well, and there were big sacks of potatoes lined against one wall. It always seems very dark and atmospheric in my memory.

The Mandarin Kitchen, a Chinese take-away restaurant which was symbolized all that was Eastern and exotic to me, and which had a beautiful brown shop sign with Chinese characters. I first learned about the Chinese horoscope from the well-produced menus that it would deliver to homes. That and the martial arts show Monkey, which we called Monkey Magic, were pretty much all I experienced of "orientalism".

RTV Rentals, a shop which rented televisions. I don't think I ever stepped inside, but I was fascinated by a large cardboard standing advertisement in the window, a gorgeous ballroom scene from some movie or TV show.

Tommy's, which later became Rite Price. This was a strange sort of shop, which sold bric-a-brac and household goods of various kinds, rather randomly organized. You never knew what you might find there; anything from framed paintings to hairdryers to tea-sets. This shop was particularly paranoid about unaccompanied minors, which greatly roused my indignation as a child. 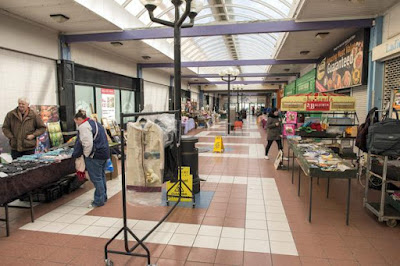 There was a shop called the Cabra Market, which I can barely remember (other than the fact that I bought Star Wars picture cards there, and that it had some kind of photography service), but whose name seemed very evocative to me-- as though Cabra was Samarkand or Byzantium.
There was the hairdressers which was once downstairs from the Corporation Offices (which I never visited, and seemed awe-inspiring), which had a case of goldfish for children to look at while enduring a haircut.
There was the vegetable shop, which I think was called the Garden Gate, and was run by a chap called Izzy or Iggy. It had paintings on the wall which were were a riot of hot, bright, Mediterranean-type colours and made quite a contrast to gloomy Dublin. Once this shop featured in a treasure hunt organized by my school. I remember the sense of consequence and solemnity with which the shopkeeper handed us an envelope when we asked for it. 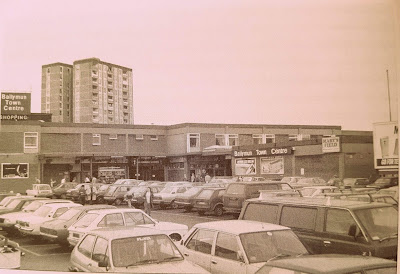 There was the butcher's shop, beside Rite-Price. This was mostly notable for the huge rugs which hung on the walls, all of which were decorated with pictures of various cattle. They also sold Skittles. I remember the saw-dust taste at the back of my throat as I stood in this shop.
There was a clothes shop called Fifth Avenue. Its name, and the sign which proclaimed it-- silver, italic lettering against a rich blue background-- made it seem impossibly classy to me. I never actually went in there. I was quite surprised when I learned it actually sold cheap clothes.
There was a cake shop with a sloping tiled surface at the bottom of its outside walls, on which children loved to run up and down.
At the front of the shopping centre, there was a triangular sign with the rather grandiose words Ballymun Town Centre on it. In a sort of "courtyard" before one entered the covered mall, there were several tall metal flag poles, with ziggurat-shaped brick bases, from which many bricks were missing. The flagpoles were (as far as I remember) without flags most of the time. But when they did fly flags, they were purely decorative flags, with random shapes and colours on them. At least, that's how I remember it.
There were public toilets nearby which I never entered, hearing the legend of their squalour.
The shopping centre was always buzzing at Christmas, people carting whole trolleys of goodies through the mall. One year I sang Christmas carols with my class in the central square. It's one of my happiest childhood memories. I remember thinking our voices sounded angelic on the crisp December air. 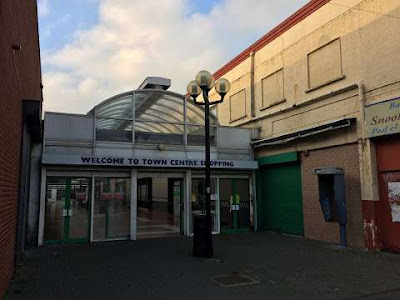 Now it's all gone. Tempus fugit, tempora mutantur, and all that. I'm almost forty-four years old. Every week, it seems, another thread linking me to the world of my childhood snaps. This one, though, was particularly keenly felt. In my mind, behind the glass pane of memory, ghosts still walk through the malls and aisles of Ballymun Shopping Centre, real and unreal at once. Every day, they will recede further away.
Posted by Maolsheachlann at 4:18 AM