Growing Up in Ballymun (I)

At the suggestion of someone who commented on a previous post, I'm going to write a series of autobiographical sketches of various places and environments I've known through my life.

I've noticed a funny phenomenon in this regard. Whenever I try to describe any particular environment I've known-- be it a school, an area, or a workplace-- it doesn't seen all that remarkable or interesting. But once I see it through the lens of my own experience, it suddenly becomes (I believe) much more so.

And I don't think this is just because I'm particularly interested in myself. I think this phenomenon holds true no matter who the narrator is. A potted history of a school is almost the driest reading imaginable. But a first-hand account of school life (like that of C.S. Lewis in Surprised by Joy) is nearly always gripping. Everything achieves a certain grandeur when it's magnified on the cinema screen of personal experience.

I will begin, then, with my upbringing in Ballymun, the suburb of Dublin. 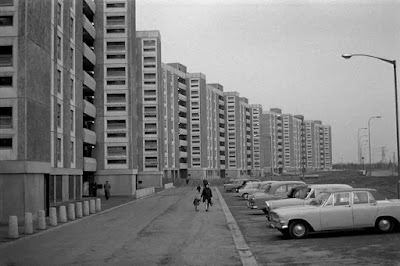 Saying that I "grew up" in Ballymun is a huge understatement. I've spent the vast majority of my life in Ballymun. It's only in the last few years that I've moved out, apart from brief interludes lodging in other places (and, for much of those interludes, I was spending a lot of time in the family home anyway). All of my childhood, teens, twenties and thirties were spent in Ballymun. I'll never spend as much time anywhere else, most likely.

Ballymun was originally a "satellite town" (the very term now seems quaint), built in the mid-sixties, designed to relocate working-class families who were living in dilapidated and often hazardous tenements in the inner city. The architecture was Scandinavian and brutalist; fourteen-storey concrete towers, seven-storey and four-storey concrete "flats", and conventionally drab houses. There was lots of green space, fields and hills. Before it became a satellite town, it had been agricultural country with very little history (although the church St. Pappin's, which is now a nursing home, is one of the few Irish churches built during the Great Famine, and has its own ghost story).

Ballymun was built four miles from Dublin Airport. My father believed that it was intentionally put there so that visitors flying in to Ireland would see it as they landed. At this time Ballymun was seen as a model community, the way of the future.

I don't want to dwell on the political aspects of Ballymun. Irish readers will know how, over decades, the buildings deteriorated, many of the promised public amenities were not built, and vandalism, crime and drugs proliferated, until the towers and flats were knocked down in the late nineties. It's hardly a unique story. In fact, the horror author Clive Barker described a similar (fictional) high-rise estate in Liverpool, in the brilliant opening line of his short story "The Forbidden": "Like a flawless tragedy, the elegance of which structure is lost upon those suffering in it, the perfect geometry of the Spector Street Estate was only visible from the air." That would be a bit of an exaggeration in Ballymun's case. 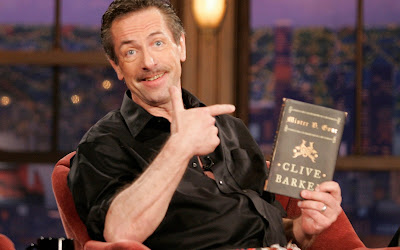 My brother Turlough wrote and directed a whole film on this subject, which does concentrate more on the political aspects, but which also serves as a wonderful archival record.

The "bad days" in Ballymun came, as far as I can tell, in the eighties, when I was growing up. The early days were much better. Photographs from the sixties and seventies show a much cleaner environment, smiling faces, a general air of vibrancy and respectability. You can actually see the grime and social alienation in photographs from the eighties and nineties. I don't think this is all down to the bleaching properties of black-and-white photography.

Of course, I believe much of the deterioration had to do with the declining influence of the Catholic Church, family values, and all those good things. But, as I say, I don't really want to get into that discussion. 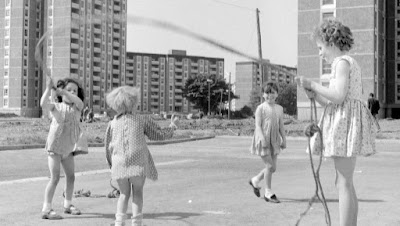 The problem in writing about Ballymun is trying to capture all the little details that are likely to elude me. For instance, on Facebook today, I found myself mentioning the "lollipop" beacon light that protruded from the roof of each of the seven towers, on top of a candy-striped rod. This glowed orangey-red at night. I often lay in bed looking at it, taking comfort in its permanence and otherworldly glow. This detail would have slipped my mind if I hadn't mentioned it on Facebook, I'm sure.

There were the "vans", which were van trailers converted into shops. These are described as "travelling" on Wikipedia, but I don't actually remember them ever moving. Indeed, I seem to remember that they were often propped up on concrete blocks. They sold basic household groceries, as well as cigarettes and sweets. Kids would hang around outside them pestering passing adults for "tempence for a chocolate bar". I used to think they were unique to Ballymun, but I've subsequently learned that they existed in other parts of Dublin.

There is much more to say about Ballymun, and my experience of Ballymun. I will return to this topic soon.

Posted by Maolsheachlann at 7:07 AM