Growing Up in Ballymun (II)

Another thing that was notable about growing up in Ballymun-- at least, growing up in the Ballymun flats-- was the central heating. The residents had no control over the central heating. The Corporation would turn it off in summer and turn it on in winter, no matter how hot or cold it was. This must have been a fairly well-known feature of Ballymun life, as I remember Joseph O'Connor (Sinéad O'Connor's brother) making a passing reference to it in a humorous newspaper article.

As it worked out, we were far more often overheated than we were cold. People would very often comment on the heat when they visited the flat: "It's like walking into a sauna!", they would exclaim. I became, for some reason, quite irritable and defensive about all this. I was very much a homebody and, at least until my mid-teens, I didn't go out much. I can even remember my father worrying that I would suffer from unnaturally thinned blood because I so seldom left the flat and I spent so long in the oppressive heat.

On the other hand, we had hot water whenever we wanted it, which is the exception rather than the rule in Ireland (as this famous Des Bishop sketch celebrates). I spent hours and hours and hours in the bath. I love being in water, and more than anything else I liked listening to the tapping and whistling in the water pipes.

If the central heating was a drawback, the view was definitely a blessing. From our sitting room window, we could see all of Dublin city centre, and indeed all the way to the Wicklow (or Dublin) Mountains. We could see Dublin Bay, and the red-and-white striped Poolbeg power station chimneys. (Although we had our own red-and-white striped chimney in Ballymun.) This view was impressive enough in the day-time, but it became magical at night; a forest of street-lights and other lights, appearing to twinkle the further away you looked and the closer together they seemed. As with the heat, visitors always commented on the view. 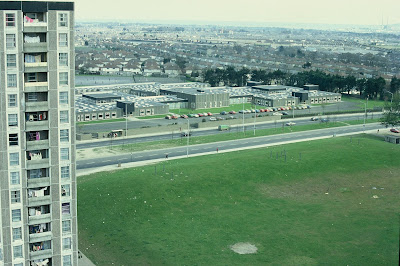 We had three bedrooms, a kitchen, a bathroom (with a bath) a living room, an L-shaped hallway, and a balcony. I didn't have my own bed until my teens. On the other hand, we had a telephone, which many of our neighbours lacked. They would visit us to make calls, often leaving some money to pay for it. It's a strange thought, now that children are issued with mobile phones upon exiting the womb. We got out first home computer in 1994 (which led me to start seriously writing poetry).

Remarkably, I can remember my mother washing clothes in the bath-tub well into the eighties. Our television was black and white for much (maybe all) of the eighties. My father would watch snooker on it. He said you learned to distinguish the colours of the balls pretty easily.

We only ever used the balcony for storage. I always felt nervous there, anyway, imagining falling over the balcony wall and plunging to my death. I've been afraid of heights my entire life, so this isn't surprising. We shared a landing with four other apartments and there were two balconies on each landing. Sometimes, when I was lying in bed at night, the thought of that seven-storey drop would suddenly frighten me and I would resolve to creep past the balcony opening with my back against the far wall, in future. Of course, I never did. Some kids actually hung off these balconies for fun, a dare which seems utterly incomprehensible to me.

The windows in the flat were unusual in that they slid up and down rather than opening outwards. I was warned innumerable times of the dangers of sticking my head out the window, and told cautionary tales about the raised window panes coming down on peoples' heads like a guillotine. There were three panes and you could push the middle one up, or the top one down. Sometimes, when the top one had been pulled down a bit, one of the many cats we owned down the years would perch precariously on the top of the pane itself. As far as I can remember, we always managed to get it down safely.

Posted by Maolsheachlann at 8:00 AM