The Greatness of W.B. Yeats

(This is an article I've just submitted to Annals Australasia magazine, who have published quite a few of my articles, including some articles on poetry. As I doubt many Annals readers read this blog, I am making bold to post it here.) 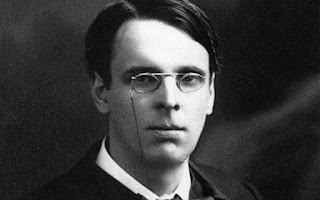 Over the last year or so, I have been writing a series of articles on great poems for Annals Australasia. So far, I have not included any poem by William Butler Yeats, despite the fact that I consider Yeats to be easily the greatest English language poet of all time. The problem is that I find it very difficult to choose one poem from Yeats. There is no one Yeats poem which stands above all the others. ‘The Lake Isle of Inishfree’ is the popular favourite, but, although it is a fine poem, it hardly deserves its eminence. Yeats himself was not especially fond of it. At poetry readings, he would read this poem first, “to get it over with”. It would be difficult even to compile a list of Yeats’s dozen best poems, so constant is the standard of excellence in his works.

I imagine that most Annals readers will be familiar with Yeats’s story, so I will keep my biographical information brief. He was born in Dublin in 1865 and he died just before the Second World War. He was a poet, dramatist, occultist, Senator and public man. He lived at a time of extraordinary political and cultural excitement in Ireland, and he was a central actor in the drama. He was a great poet, a great man, and a great Irishman.

G.K. Chesterton is my favourite writer, and the writer who has had the biggest influence on my opinions and my view of the world. Yeats, however, is the writer whose words haunt me most persistently. I can’t even hazard a guess at how often a Yeatsian phrase swims into my mind. Time and again, Yeats expresses an idea so perfectly, and so lyrically, that the idea will never again enter your head without being clothed in Yeats’s words.

Here is one example. All my life I have been a fan of speculative fiction—an umbrella term used for fantasy, science fiction and horror. Many people consider such fiction to be a waste of time, mere escapism. Those of us who love these genres, however, often feel a positive need for fictional words which never were, and which never will be, and which provide a momentary refuge from the weight of the real world. Yeats, who often drew on mythological landscapes for his poetry, supplies us with the perfect explanation of this appeal: “lands that seem too dim to be burdens on the heart.”

I’m not the only one who finds Yeats’s words unforgettable. Writing about his poem ‘The Song of Wandering Aengus’, one woman admitted she never went outdoors for a breath of fresh air without thinking of the poems opening lines:

Note the simplicity of those words: “a fire was in my head”. It's like something a six year old might say. Yeats always seems to strive for the simplest and most direct way of expressing something. His language could be lush and gorgeous, as in this stanza from ‘The Man Who Dreamed of Fairyland’:

He stood among a crowd at Dromahair;
His heart hung all upon a silken dress,
And he had known at last some tenderness,
Before earth took him to her stony care;
But when a man poured fish into a pile,
It seemed they raised their little silver heads,
And sang what gold morning or evening sheds
Upon a woven world-forgotten isle
Where people love beside the ravelled seas;
That Time can never mar a lover's vows
Under that woven changeless roof of boughs:
The singing shook him out of his new ease.

There is no telegramese here, no ostentatious “muscularity”, no artificial abhorrence of adjectives or of ‘literary’ words such as ‘ravelled’ or ‘world-forgotten’. And yet, even here, Yeats displays his determination to use the most direct language. “When a man poured fish into a pile” is as matter-of-fact a construction as could be imagined. In all his poetry, and especially in that written in his later years, Yeats seeks after this spontaneity, this naturalness of expression. Only very rarely did it lead him into bathos.

Sometimes his sublime simplicity is entirely on the surface:

I treasure the anecdote of a meeting between Oscar Wilde and the young W.B. Yeats, in which Wilde read out this line from one of his essays: “The world has grown sad because a puppet was once melancholy”. Yeats, rather precociously, suggested Wilde should replace ‘melancholy’ with ‘sad’. He was not afraid of repetition or apparent crudity. And indeed, when we read him, there is nothing jarring about his simplicity or directness or repetition. We don’t find ourselves thinking: “Here is Yeats’s trademark audacity”. Yeats has already judged the effect on the ear perfectly, and the poem flows smoothly.

If Yeats was simply a master of language, a lyricist par excellence, he would deserve a high place in the poetic pantheon. But he was more. He was a deep thinker, a man who used his poetry to grapple with very elevated themes; the patterns of history, the idea of immortality, God and the soul, the nature of art, the nature of the self, and so on. He was a great poet because he was not content to be simply a poet. He never stagnated in the slough of art for art’s sake. Though he had a very high conception of the dignity and importance of the artist, he did not isolate art, or poetry. from the rest of life. The currents of politics, family, mysticism, history, friendship, the theatre, and many other aspects of existence, course through his work, and give it life. He sometimes cursed this attraction towards the hurly-burly:

The fascination of what's difficult
Has dried the sap out of my veins, and rent
Spontaneous joy and natural content
Out of my heart. There's something ails our colt
That must, as if it had not holy blood
Nor on Olympus leaped from cloud to cloud,
Shiver under the lash, strain, sweat and jolt
As though it dragged road metal. My curse on plays
That have to be set up in fifty ways,
On the day's war with every knave and dolt,
Theatre business, management of men.
I swear before the dawn comes round again
I'll find the stable and pull out the bolt.

If Yeats had remained on Olympus, however, he would have been a much lesser poet. When he was a young man, the word “hammer your thoughts into a unity” came into his head; and indeed, he spent the rest of his life trying to unify the many preoccupations of his life in a poetic vision.

If he sought unity, however, it was not by suppressing doubts, tensions, or oppositions. Quite the opposite is true. “Our of the quarrel with others we make rhetoric”, he wrote, “out of the quarrel with ourselves we make poetry.” The poetry of Yeats is full of self-questioning, of dramatized internal conflict. He was the furthest thing from a ‘party man’. Although he was an Irish nationalist, and a pioneer in drawing on Irish mythology and history for literary inspiration, he fought bitterly against those who would reduce Irish literature to a sort of cultural propaganda. Similarly, although he was instrumental in founding The Abbey Theatre in order to bring theatre to the masses, he was no populist. Ironically, this most popular of modern poets was a passionate believer in aristocracy, including the aristocracy of taste. “I am as anarchic as a sparrow”, he admitted in later life.

Some of Yeats’s best poetry arises from this refusal to be pigeon-holed, notably ‘The Coat’:

I made my song a coat
Covered with embroideries
Out of old mythologies
From heel to throat;
But the fools caught it,
Wore it in the world's eyes
As though they'd wrought it.
Song, let them take it,
For there's more enterprise
In walking naked.

This lordly independent-mindedness certainly enriched Yeats’s poetry. But what about Yeats the thinker, and what about Yeats the man? Here, I think it was less beneficial. Yeats’s anarchism, outside the context of his poetry, led him into dilettantism, and ultimately made him a crank. He was willing to dabble in all the religions of the world, but unwilling to consistently embrace any of them. After years of consorting with occultist charlatans such as Madame Blavatsky, he constructed his own arcane cosmology and theology which, aside from its influence on his poetry, is of absolutely no value whatsoever.

Not only this, but the ‘Yeatsian pose’ has had a dreadful effect on Irish cultural life. You can’t throw a canapé at any Irish cultural event without hitting some poet, novelist or painter who proudly refuses to be restricted to any particular aesthetic or worldview. But anarchy is a dead end. Yeats could only draw from folk stories and folk ballads because generations of Irish peasants transmitted them faithfully and even monotonously. The world needs mediocrity as much as it needs genius. Perhaps it needs mediocrity more.

The Irish public of Yeats’s own day did not always take him seriously as a public figure. He was a favourite of cartoonists. His aristocratic pretensions were mocked (“Yeats has grown so aristocratic he’s evicting imaginary tenants”, one wit remarked). He was derided as “pensioner Yeats” when he accepted a pension from the British Prime Minister, despite his nationalist beliefs. There were riots in the theatre he helped to create when ordinary Dubliners, much to his disgust, found one of its plays too racy for their liking. And yet—as his biographers attest—his contemporaries were aware, even when he was hardly out of boyhood, that he was a very great poet and a very great man.


All in all, I think it could be said that the Irish got Yeats right from the beginning.
Posted by Maolsheachlann at 7:52 AM