The Dying of the Light

Recently, on the Irish Conservatives Forum, there's been a bit of discussion about the spiritual life of England-- more particularly, how healthy it is, whether it still exists, and whether (assuming it's moribund) it has any hope of revival.

This is an article I wrote for the Catholic Voice some years ago. (I jumped when I re-read the reference to being thirty-six!) It was written for an Irish readership, so there are some Irish cultural references that non-Irish people are unlikely to get. But not many. I'm not sure why I listed I'm Alan Partridge among shows I've never watched, since I've often watched it and know some scenes almost off by heart. A slip, no doubt.

My writing style grows more fastidious with the years-- sometimes I wince when I read something I've written even as recently as this. I would never talk about a "trunkful" of anything now, unless it was actually filling a trunk.

The Light of Faith

“Once the flame of faith dies out, all other lights begin to dim”. These beautiful words are taken from Lumen Fidei, the last encyclical written by Pope Benedict XVI (with some finishing touches from Pope Francis). I believe in their truth with all my heart. I see evidence of it everywhere. And I think it’s a point that Christians should make insistently and forcefully, in our efforts to re-evangelise the Western world. 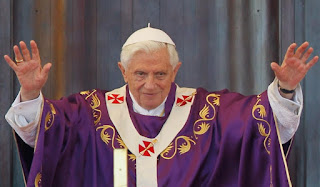 Pope Emeritus Benedict has often written of the boredom that afflicts modern man when he rejects God, and when he rejects the transcendental dimension of life. (From his Introduction of Christianity: “In the leaden loneliness of a God-forsaken world, in its interior boredom, the search for mysticism, for any sort of contact with the divine, has sprung up anew.”)

‘Boredom’ is a strange word to use, perhaps, in describing a godless society. We tend to reach for words like ‘emptiness’, or ‘meaninglessness’, or ‘alienation’, instead. Perhaps, in envisaging a society that has turned its back on God, we picture neon lights and nightclubs and dancing girls, or similarly heady images. But boredom? Surely not boredom.

And yet, I think that Pope Benedict—profound and original thinker that he is—has got it exactly right, in this instance as in so many others. When a society rejects God, it becomes a boring society. And not only boring, but banal. The banality of post-Christian society is perhaps the worst thing about it. And if not the worst, it’s certainly the most pervasive.

A post-Christian society is boring, and bored, because only the sacred and the otherworldly can satisfy the human capacity for awe and wonder.

I am thirty-six years of age. I grew up in a post-Christian society. I never experienced a world where Christianity was simply assumed to be true. Matthew Arnold had written about the “melancholy, long, withdrawing roar” of the “sea of faith” even before my grandparents were born. (Like King Charles II, God has been “an unconscionable long time dying”.)

So I cannot claim to have witnessed Ireland’s transition from a Catholic to a post-Catholic nation. But I suppose I came in at the end, and caught the last act of the drama. And it seems glaringly obvious to me that even the difference between a residually Christian society (like the Ireland of the nineteen-eighties) and a predominately secular one (like the Ireland of today), is quite substantial. 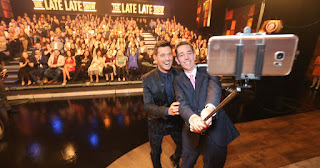 Now, these are all deliberately trivial examples, and I’m certainly not expressing wild enthusiasm for any of the first set. But isn’t there a perceptible decline in class, in depth, in gravitas, even here? Isn’t even a Church-bashing comedian like Dave Allen, coming from a more Christian context, a lot classier than a Church-bashing so-called comedian like Tommy Tiernan? Isn’t even a liberal like Garrett Fitzgerald, reared in a strongly Christian atmosphere, more intellectually serious than a political opportunist like Enda Kenny?

I firmly believe that even this small difference—as well as the much greater difference between the Ireland of W.B. Yeats and John McCormack and Walter Macken and all those other luminaries, and the Ireland of today—comes down to Christianity. “Once the light of faith goes out, all other lights begin to dim.” A Christian culture is saturated with ideas of the sacred, of the sublime, of the eternal, of mystery. Even the village atheist (and Ireland certainly had her share of village atheists) can’t help absorbing these ideas—and reflecting them.

But, though the banality of secularism has entered deeply into the soul of Ireland, I would venture to say that the process is far from complete. The sun may have set but the evening light lingers in the sky. I think we have to look across the Irish Sea—to the country that Matthew Arnold was writing about in his poem ‘Dover Beach’, which I quoted above—to see the banality of secularism in its full glory.

There’ll Always Be an England?

But before I start writing about England, I want to make one thing clear. I have been an anglophile all my life. I can’t remember a time when my imagination was not stirred by the land of Tolkien, C.S. Lewis, P.G. Wodehouse, Lord Tennyson, John Betjeman, Hammer horrors, Carry On movies, Keith Waterhouse and Tom Sharpe. Even the rugged beauty of place-names like Sussex and Brompton and Halifax speak to something deep in my soul. 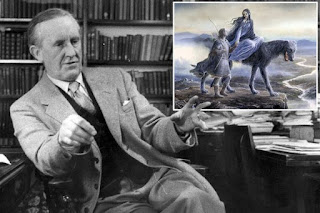 So I take no pleasure at all in the claim that I am going to make here; that the soul of England has perished, and that this is because it has so completely rejected its Christian heritage.

The Church of England had to close 1,500 churches between 1969 and 2002. Only about six per cent of the UK’s population go to church. Back in March, The Daily Mail reported that just 800,000 people attend Church of England services on an average Sunday. This in a nation of fifty-six million souls. It’s true that attendance is higher amongst Catholics, and that Pentecostal and Evangelical churches are growing. But these have made very little impact on the surrounding culture.

The idea has even grown up that England is an intrinsically irreligious nation, that the muddle-headedness of Anglican theology is simply the proper spirituality of a people who hate dogma and are embarrassed by anything as earnest and emotive as religion.

A funny notion, really, for a nation whose Civil War, only a few centuries ago, was close to being a war of religion; for the land of St. Thomas More, St. Thomas Beckett, John Milton, Thomas Cranmer, John Wesley and Guy Fawkes, The Canterbury Tales and The Pilgrim’s Progress.

So how can I say that the soul of England is now dead? For one thing, because it’s not just me saying it. In recent times, there has been almost an industry of books lamenting the death of England. The Abolition of Britain by Peter Hitchens is the best I’ve read, while England: an Elegy by Roger Scruton follows close behind. Similar titles (which I haven’t read) include The Death of Britain? by John Redwood and Anyone for England? by Clive Aslett. 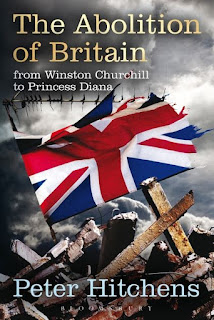 If you want to see evidence of the death of England, just turn on your television and tune in to the BBC or any other British channel. There is a deeply depressive, nearly nihilistic undertone to almost every broadcast. I see this in many of the British shows which (I hasten to add) I don’t watch, but snippets of which I’ve seen. Shows like The Inbetweeners, I’m Alan Partridge, Teachers and The Royle Family reflect such a bleak view of human nature and of human life that it’s staggering. Characters are rude to each other as a matter of course. Everybody seems to be miserable all the time. Most of all, nobody seems to believe in anything—not just in God, but in anything.

This is true even of good English TV shows. I watched the comedy series Rev, which follows a Church-of-England vicar who shepherds a vanishingly-small inner-city congregation in London. The show is notable for taking religion seriously, but it’s almost relentlessly downbeat. The reverend Adam Smallbone’s best friend is a down-and-out who smokes cannabis (Adam sometimes joins him) and reads pornographic magazines. The handful of people who turn up to church are eccentric and directionless. The Archdeacon who makes Adam’s life a misery is a snobbish careerist. London is presented in the dingiest and grungiest light possible.

Or take the very successful show The Office, which was a ‘mockumentary’ set in a paper office in Slough, and won a trunkful of awards. I loved it when it came out, but since I’ve become a fan of the later American version, I can’t watch the English version anymore. The American Office is more or less upbeat, warm-hearted and life affirming. The English Office is almost sadistically bleak. I believe that the difference is down to the fact that America is a Christian country and England is not. 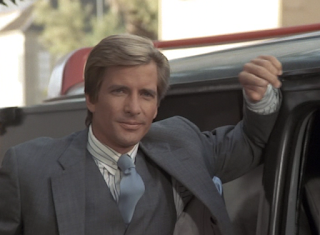 Contemporary English entertainments that do take a romantic view of life tend to be either set in the past—the endless proliferation of costume dramas and period detective mysteries—or else in an imaginary world that draws on the past, such as the Harry Potter series, which owes so much to Enid Blyton-style school stories of yesteryear.

No More Beer and Sandwiches

I see the same absence of any kind of deep belief, any source of unabashed idealism, when I read the opinion pieces of English newspapers. Any discussion of religion, or of English national identity, or of any other ‘high-flown’ subject, is inevitably conducted in an infuriatingly flippant manner. Public intellectuals like Terry Eagleton, Will Self and Simon Schama seem to wear a perpetual simper, and to trade in an all-embracing irony.

It was not always thus. I was deeply surprised, not long ago, when I learned that a ‘National Festival of Light’, in protest against the permissive society and the increase of sex and violence in the mass media, had been held in England in 1970. Its leading figures included Malcolm Muggeridge, Mary Whitehouse and Cliff Richard. Amazingly, almost half a million people joined its rally in London, and a hundred thousand people took part in smaller rallies around the nation. Four decades later, this is impossible even to imagine. 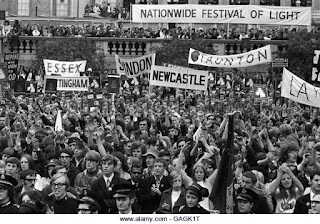 It isn’t just Christian idealism that seems to have disappeared from English life. Where is the beer-and-sandwiches socialism of the working men’s clubs and the night schools? Where are all the port-drinking, Punch-reading High Tories? What vision of human life animates English souls today? None that I can think of. And, in their absence, the nation seems to have sunk into an atmosphere of all-pervading cynicism at worst, of ironic world-weariness at best.

It’s true that a certain gloom has always been a part of the English psyche. Eeyore, of the Winnie the Pooh stories, is a typically English creation. English culture, from the Anglo-Saxon epic Beowulf to the paintings of L.S. Lowry, has always shown a rather Eeyorish streak.

But the point is that, for a millennia and a half, this was offset by the joy of the Christian Gospel. In every culture it meets, Christianity takes whatever it encounters, purifies it, and ennobles it. The sun of Christianity, shining on the soil of England, gave the world the poetry of William Blake, the paintings of John Constable, the ghost stories of M.R. James, the fussy vicars of Anthony Trollope, and ten thousand other cultural treasures besides. But now—in my opinion, at least—that England is dead and gone. And our own nation seems to be well along the same path.

Truly, when once the flame of faith dies out, all other lights begin to dim.
Posted by Maolsheachlann at 3:34 AM