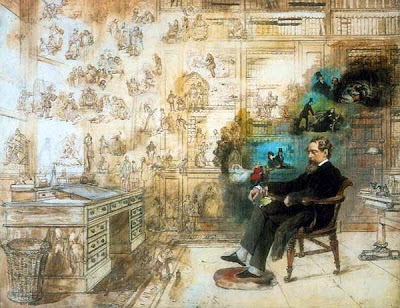 I like to think that this blog is, amongst other things, a tribute to the essay form. (I know I've written a lot about the essay form already, but bear with me.)

When I was a kid, the word 'essay' had the same flavour as 'multiplication table' or 'technical drawing'. I couldn't imagine anything less exciting, less fun.

Even back then, this didn't make very much sense, as there were essays that I enjoyed reading without considering them essays. I had a collection of newspaper articles by Keith Waterhouse, the veteran English journalist and all-round literary jobber, which I read again and again. Later on, I became a fan of Flann O'Brien, the Irish literary genius and newspaper columnist, whose Best of Myles was such a favourite amongst several members of my family that it took on that familiar look of favourite books; not only was it missing the front and back cover, but several pages from either end, too. (It's heartily recommended, by the way, although much of the observational humour and the pastiche might pass you by if you're not Irish.)

Of course, much of my dislike for the idea of essays came from the sort of essay we were taught to write (and often given to read) at school-- the sort of essay where you start off by declaring what you are going to write, you write it, and you finish up by summarizing what you've written. I'm certainly not criticizing English teachers for requiring this from their students. The whole idea that education should focus primarily upon 'unleashing creativity' seems very silly me. Children, and learners in general, need to learn how to plod before they can somersault. (When I was about fourteen, our English teacher made the class come up with a list of words to use instead of 'nice'. When I grew older, I looked back on this exercise with scorn. But then I grew up a little more, and it occurred to me that, although there is nothing at all wrong with the word 'nice', youngsters are indeed all too inclined to pepper it in places where another word would make a nicer distinction.)

Or rather, they could all be essays. An essay, to me, implies a certain infusion of personality, a willingness to step back a little from the subject at hand, an atmosphere of being at ease rather than on duty.

Having developed a taste for the essay, I've found myself occasionally borrowing anthologies of essays from my library. I'm invariably disappointed. They're nearly always full of essays by 'masters of the form' such as William Hazlitt, Charles Lamb, Michel De Montaigne, Francis Bacon, Hilaire Belloc, Richard Steele and Ralph Waldo Emerson. (Chesterton, too, although they usually choose his least interesting essays-- 'A Piece of Chalk' and 'On Lying in Bed', for instance.)

The sort of essays that appear in these collections, almost without exception, are written in either a 'whimsical' style-- as effervescent and flavourless as sparkling mineral water-- or are as ponderous as a speech at a headmaster's conference. A common perception of the essay seems to be that it should be a burst of linguistic and rhetorical fireworks expended upon a trivial subject-- the more trivial, the better. (This is why 'A Piece of Chalk' and 'On Lying in Bed' are the usual choices from Chesterton.) This sort of essay always has the tone of a clever, precocious schoolboy amusing his elders. On the other hand, essays by luminaries like Montaigne and Bacon, though I shudder to admit it, are so general and abstract as to be unreadable. (I have an ally in C.S. Lewis here, who wrote very witheringly of Bacon's essays.) The supposed masterpieces of the essay format tend, in my view, to be either too specific in subject matter, or too general-- 'How to Name a Dog' on the one hand, 'Of Friendship' on the other.

Anyway, all of that is-- believe it or not-- simply by way of preamble. It's not what I set out to write about at all.

A particular collection of 'essays' that I prize (though more for its atmosphere than its quality) is the splendidly-titled Don't Shoot-- I'm Not Well! by Ted Bonner. Ted Bonner, who died only two years ago at the age of 85, was a businessman, a motoring correspondent, a raconteur, an after-dinner speaker, and a writer and broadcaster. He was once a stand-in host for 'The Late Late Show', the most famous television show in Irish history.

I've never read anything he wrote other than this book, which has a very 'after-dinner speech' flavour to it. It's full of anecdotes of hilarious (or not so hilarious) mishaps and misadventures, observations on the absurdities and frustrations of everyday life, and so on. A fishing trip where it rains non-stop, an unsuccessful attempt to find the Washington Bridge, recollections of the author's enormous appetite as a child-- you know the kind of thing. It was published in 1974, so it has a nostalgia value for me (even though I was born in 1977). It belongs to that period in Irish history when we had a modern standard of living but we were still solidly nationalist, Catholic and genteel. (Genteel, at least, to the extent that explicit vulgarity and nastiness in print was rare.)

But even all that is preamble, and not my subject proper. I don't want to write a review of Don't Shoot-- I'm Not Well. I only want to discuss eleven words out of the whole text. And that's the Dedication at the beginning.

This is it: For anyone, anywhere, with whom I have ever shared a laugh.

I've found that dedication coming into my mind again and again recently. As a matter of fact, and in all sincerity, I find it profoundly moving.

Partly this is because I've been thinking about prayer so much lately. The more I pray, the more I find myself trying to remember as many people as I can in my prayers. And the more I do that, the more I realize how many people there are to cover, and how easy it is to leave them out. And I especially find myself thinking of all the people whose names I never even knew, or whose names I've forgotten; people I spoke to once at a party, or who did me a kind deed, or who laughed with me when we both witnessed something funny.

And that gets me thinking about the abundance of life. This is a thought that haunts me constantly. I haven't had a very eventful life-- less eventful than those of most people my age, or even younger. But every human life is packed with such a variety of character, incident, scene, atmosphere and plot that it outdoes the most ambitious of epic novels. I wrote this post to express it, once, but I still feel I haven't got close to expressing the wonder of the thing.

I once owned a children's encyclopedia (or, more accurately, a compendium of questions and answers) which included a reproduction of a painting called Dickens' Dream. It showed Charles Dickens asleep in an armchair, surrounded by a cloud of the characters he dreamed up. But we are all like Dickens in that picture. It fascinates me to think how any man, woman or child sitting in an armchair, alone, is surrounded by a similar cloud-- not of fictional beings only, but of memories and sights and sounds and knowledge.

Since I was a boy, and long before I started to write poetry in a disciplined way, there was a poem in my mind that I could never successfully translate into words-- a poem about how the lustre of a human eye is more wonderful than any precious stone's lustre. The pupil of a human eye is a gateway to infinity. Even a five-year-old child remembers and thinks more than he could ever tell you. This seems marvellous and surprising to me.

The closest this poem has come to existence is a poem by Pat Tierney, a local Ballymun poet, that appeared in a community newspaper. It was written to a priest (a athair is Father in Irish), and the only lines I can remember, and probably misremember, referred to the priest's eyes in this way:

Those God-made galaxies, a athair
How deep God made those galaxies.

In this light, a line like For anyone, anywhere, with whom I have ever shared a laugh takes on a certain sublimity, like the sky at night or the view from the top of a mountain.

But isn't it funny how important such acts of remembrance are, even for those who don't pray or don't believe in prayer? Why does the human race build memorials and statues? Why do we have days of remembrance? Indeed, why do we dedicate books? What does dedicating a book do? Ted Bonner dedicated Don't Shoot-- I'm Not Well! to everyone, everywhere, with whom he ever shared a laugh. Presumably, many (if not most) of those people will never know he dedicated it to them. But it doesn't feel like an empty gesture, any more than a song or a movie or a book dedicated to a dead person feels like an empty gesture. It feels very meaningful.

It's not just prayer that is a strange notion. It's thought itself. What is a thought? How long does it last? How complex can it be, and remain a single thought? Why do we feel that thinking of something, and especially of someone, can be a generous and meaningful act in itself? "There wasn't a day I didn't think of you" is the kind of thing one person might say to another to show how important she is to him. Or, conversely: "Did you ever even think of me?".

Even if you don't believe in prayer, finding a place in your thoughts for everyone you've ever loved, or liked, or shared a part of your life with, or even felt any kind of connection with-- the people who died in 9/11, or your remote ancestors, or some skeleton you saw in a museum-- somehow seems like an imperative. At least, it does to me. I don't imagine I'm alone.

But enough. I realize I've written hundreds of words on an eleven-word dedication, and I thus qualify for the Penguin Book of Essays.
Posted by Maolsheachlann at 8:05 AM