An Analysis of Irish Church Names

This is an article which I submitted to the Irish Catholic last year. The editor seemed inclined to publish it, but as far as I know it never appeared. Even if it did appear, I see no harm in publishing it here.

This exercise took a huge amount of time and effort. I hope it's of interest to some readers.

The first churches I can remember are the Virgin Mary and Holy Spirit churches in Ballymun, where I grew up. They are virtually identical in terms of construction—plain brown-brick buildings, functional on the outside and sparsely decorated on the inside. 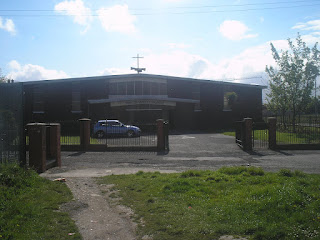 These twin churches, humble as they are, have always been my ideal of sacred architecture. I like their very plainness, their simplicity. Their names, too, seem charmingly ordinary. When it came to Catholic church names in Ireland, I always assumed that the Virgin Mary and the Holy Spirit must be amongst the most common.

Well, recently I learned that they are pretty high up the list, but not right at the top. The Virgin Mary reaches joint eleventh on the list of most popular Irish Catholic church names, while the Holy Spirit only comes twenty-second.

How do I know this? Because I have recently compiled a database of Catholic church names in Ireland, intrigued by what this might reveal about Irish Catholicism. (For the purpose of the list, I considered chapels and oratories to be churches.)

Naming is a fascinating act. When a name is given—whether it’s to a child, a ship, a house, or a teddy bear—it is rarely given lightly. Out of all possible names, we usually choose one that is especially meaningful to us.

Church names are especially interesting. Many people have pointed out that, though the Catholic faith may seem restrictive from the outside, there is actually a vast realm of freedom inside it. There are almost as many different forms of Catholic piety as there are Catholics— so many different saints, prayers, devotions and spiritualities to choose from. Every nation has its own ‘flavour’ of Catholicism, which finds expression in many ways—the choice of church names being just one of them.

Are there rules for naming a Catholic church? There are indeed. The guidelines are laid down in a document entitled The Rite and Dedication of a Church and Altar, published in 1977 by the Congregation for the Sacraments and Divine Worship. These are quite specific; for instance, the Holy See must give special permission for a church to be named after a Blessed rather than a Saint. Despite this, considerable latitude remains.

I composed my database using lists of Mass times, available on various web sites. I won’t claim these are exhaustive, but they are pretty comprehensive, and I don’t think any omissions would affect the overall picture.

So what were the most popular church names? Well, here are the top twenty (some places are shared by several names, which I’ve separated by a stroke).

Considering the reputation of the Irish for extravagance in language, it is perhaps surprising that the simple ‘St. Mary’ is the clear favourite of Our Blessed Mother’s titles when it comes to naming churches. The presence of St. Patrick in second place is no surprise at all, and the popularity of St. Joseph may be explained by the importance placed on the family in Irish tradition. St. Mary’s, St. Patrick’s, and St. Joseph’s are easily the triumvirate of most popular church names in Ireland, and many towns and villages contain one of each. Very often chapels of ease are named St. Joseph’s.

Compiling the database, I made some interesting discoveries. There is only one Irish church named after a layman—the Daniel O’Connell Memorial Church in Cahersiveen, Kerry. Only a couple of Irish churches have the name Our Lady of Knock, while more than twenty are named for Our Lady of Lourdes. The most recent figure to give his name to an Irish place of worship is St. John the XXIII.

The popularity of the Assumption and the Immaculate Conception may be explained by the fact that both of these dogmas were proclaimed in the last century and a half, and a great many Irish of our current churches were built after Catholic Emancipation in the 1820s.

The most poetically-named church in Ireland, in my view, is Our Lady of the Snows in Broadford, Limerick. Other titles of Our Lady, such as Star of the Sea and Our Lady of the Wayside, are also very picturesque.

The influence of continental Catholicism on Ireland has often been remarked upon, and it seems to be reflected in church names— I found 35 churches named after French saints, 27 after Italian saints, 15 after Spanish saints, but little more than ten after British saints—and St. David accounts for most of those.

However, 843 of the churches on my list are named after Irish saints—almost thirty per cent, far more than all the other (post-Biblical) saints combined. When it comes saints, it would seem, we are nothing if not local—and patriotic!

Posted by Maolsheachlann at 1:37 PM