This is a thread I started on the Irish Conservatives Forum. Any suggestion from my blog readers is welcome:

OK, this thread is close to my heart, and I'm going to pin it-- because I get to do that. If anyone has a problem with that, please send a letter of complaint to Complaints Department, Irish Conservatives Forum, P.O. Box Go Jump in a Lake.

I've always wanted to compile an attemptedly exhaustive list of Irish traditions and customs-- including both the obvious ones, and the ones that we never think about. I mean, trying to get really fine-grained and forensic about it.

It's extraordinary how we don't think of a lot of our traditions and customs. When I was getting married, my wife was very interested to know about Irish wedding customs, and I get kept saying: "I can't really think of any. I've only ever been to one wedding and I was a kid." One day, we were in a shop, and the shop assistant fumbled (or, more likely, I fumbled) the change and it fell everywhere. "Grushie!", someone said. "What's grushie?", my wife asked. "Oh, it's an Irish wedding tradition where you throw coins at a wedding", I said. 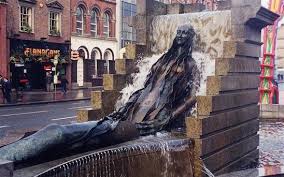 The "floozie in the jacuzzi"

A few years ago, I heard the card game twenty-five was Ireland's national card game. I'd never heard this. It's little things like that fly under the radar.

Someone on another thread mentioned the Irish tendency to ignore celebrities, which seems distinctively Irish (though doubtless it's not uniquely Irish). This is the kind of tradition or custom we never think of when it comes to these lists. So I wanted to see can I make a really exhaustive list which could be added to by others, over time. They can be quirks of language, quirks of personality...anything which makes Ireland distinctive (again, doesn't have to be unique).

Please add posts and I will integrate them into the main lists.

So I am going to kick off with all the most obvious ones:

I'm not that much of a sports person, I prefer soccer to Gaelic games. Maybe some people can tell me traditions within those sports, such as making mad speeches when awarded the All-Ireland trophy.

Irish traditional music
Sean-nós singing
Irish folk ballads
Tin whistle
Uileann pipes
Ceilidhs
Set dancing
Lúibíní, whatever the hell they are
Country music, in some areas. (I hear it is a way of life in some towns. Is that true?)

The Irish language
Shelta
The various dialects
Yola and Old Fingalian (well, these are more memories than traditions, but I'll put them in anyway).
Hiberno-English, which deserves a section all of its own

Giving rhyming names to Dublin statues (the Floozy in the Jacuzzi, the pr---- with the sick, the hags with the bags, the tart with the cart, etc.) No name for the Millennium Spire ever stuck, despite many efforts.

Catch-all parties.
Clientelism and parish pump politics.
The two-and-a-half party system.
Small, breakaway parties that are successful for a while and then disappear.
Splits. ("The first item on the agenda of every Irish organization is the split.")

The Irish wake.
"I'm sorry for your troubles".

The "debs"
The colours debate between Trinity and UCD

Standing at the back of Mass
Taking the straw from the Christmas crib
First Communion madness
St. Brigid's Cross
St. Patrick's Day being a "break" from Lent