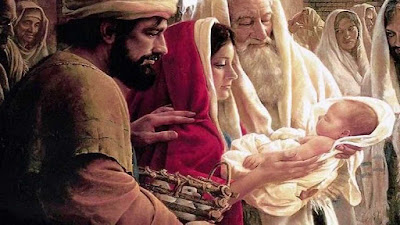 And today we have an additional tradition, before mass itself (which is the greatest of all traditions)-- the blessing of the candles. Tomorrow, on the Feast of St. Blaise, we have the blessing of throats. Much as I love tradition, I've never gone forward for the blessing, since I'm rather awkward about such things. But I take pleasure in the fact that it's happening.

The gospel passage today is one of my favourites:

Now in Jerusalem there was a man named Simeon. He was an upright and devout man; he looked forward to Israel’s comforting and the Holy Spirit rested on him. It had been revealed to him by the Holy Spirit that he would not see death until he had set eyes on the Christ of the Lord. Prompted by the Spirit he came to the Temple and when the parents brought in the child Jesus to do for him what the Law required, he took him into his arms and blessed God; and he said:


‘Now, Master, you can let your servant go in peace,
just as you promised;
because my eyes have seen the salvation
which you have prepared for all the nations to see,
a light to enlighten the pagans
and the glory of your people Israel.’

The image of Simeon holding the baby and telling the Lord that he can now depart in peace is one that moves me profoundly. It's hard for me to explain exactly why.

One of the reasons it moves me, I think, is because the idea of peaceful death is so beautiful. I love the thought of a satisfaction so deep that death is no longer regarded as something to be feared, or even to be regretted.

This interview with Malcolm Muggeridge, the English journalist who became a prominent (and rather unlikely) Christian convert, reminds me of this passage. In the interview, Muggeridge says he looks forward to leaving the world, and he explains why. Someone in the comment section describes him as a prophet, and he certainly has that aura. There's a deep serenity to the video.

The canticle of Simeon also reminds me of a line in the Analects of Confucius: "He has not lived in vain who dies the day he is told about the Way." (Confucius is a figure I admire very much.)

The line "a light to enlighten the pagans" also moves me, as does "my eyes have seen the salvation".
Posted by Maolsheachlann at 7:06 AM